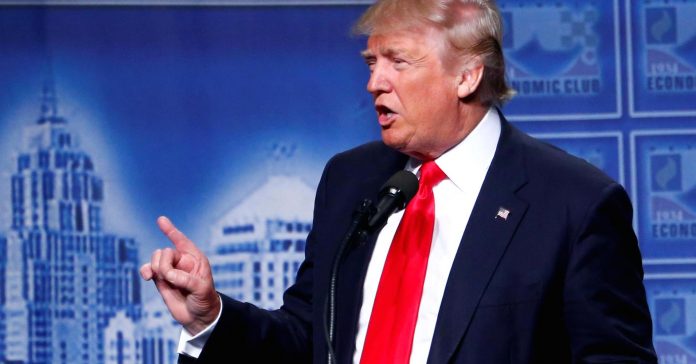 The first commissions a report on trade practices that contribute to the trade deficit, while the second seeks better collection of anti-dumping and countervailing duties.

The report, spearheaded by the Commerce Department and U.S. Trade Representative, aims to identify every trade abuse and “non-reciprocal practice” that contribute to the trade deficit.

Within 90 days, the report will go back to the Oval Office detailing specific causes for the deficit, country by country, product by product.

Commerce Secretary Wilbur Ross repeatedly emphasized that this report will provide the White House with an empirical basis on which to make decisions about trade. It will allow the Trump administration take a “measured and analytical approach” and not do anything too casually or abruptly, he said.

“What’s driving it is that the U.S. has the lowest tariff rates and the lowest non-tariff barriers of any developed country. While other countries talk about free trade, they actually are far more protectionist than we are,” Ross said on Thursday.

It’s likely that the report will find multiple reasons for the trade deficit, which Ross said could include lax enforcement, asymmetrical rules or currency misalignment. He said, however, that in some instances, the report will find that no real action should be taken because the deficit with a particular country isn’t related to bad behavior.

The U.S. isn’t oil self-sufficient, so it imports a lot of the commodity, Ross said. In other cases, there may be an imbalance simply because other countries are better at manufacturing a specific product or can do so more cheaply than the U.S.

The second executive order seeks to deal with what Peter Navarro, head of the National Trade Council, called the “long-festering problem of undercollection of anti-dumping and countervailing duties.” Both types of tariffs aim to protect the competitiveness for U.S. products, by bridging the gap between cheaper imports and American manufactured goods.

Navarro said on Thursday, “It does our workers and domestic manufacturers no good for the Department of Commerce to impose countervailing duties if they go uncollected at the border.”

The second order is also expected to direct the Department of Homeland Security to better combat violations of U.S. trade and customs laws and enable enhanced seizure of counterfeit and pirated goods.

Earlier Thursday, Trump tweeted that his upcoming meeting with Chinese President Xi Jinping at Mar-a-Lago will be a “very difficult one in that we can no longer have massive trade deficits and job losses.”

@realDonaldTrump: …and job losses. American companies must be prepared to look at other alternatives.

Yet when pressed on Thursday if these executive orders are meant to put China “on notice” or target the country, Ross and Navarro disagreed with those characterizations.

Ross had pointed out that the United States’ largest trade deficit is with China, but that fact was simply meant to be used as a reference and not a ranking of targets. Navarro said that these orders are meant to shed light on trade abuses in general.