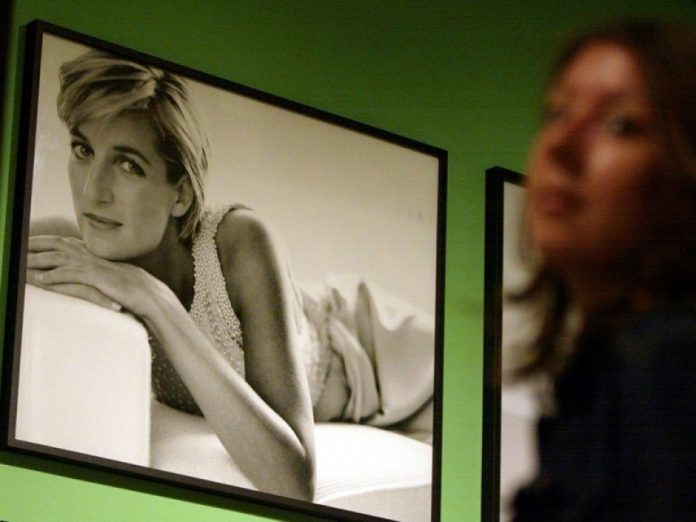 Princess Diana, popularly known as “the Queen of Hearts” and “the People’s Princess,” died in car crash in Paris 20 years ago on Aug. 31, 1997. Her death shocked and saddened people around the world, including millions in Canada.

In the photo below, a visitor stands in front of a portrait of Diana at London’s National Portrait Gallery in 2002. 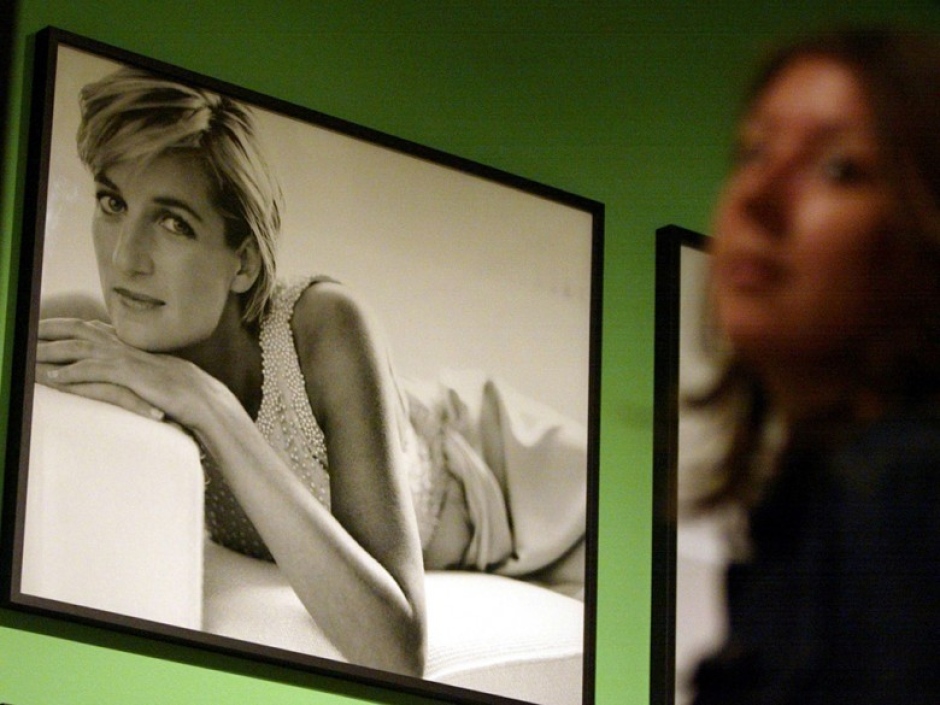 This auctioned image, dated February 1981 and marked “not to be published,” shows a teenage Diana Spencer before she became the Princess of Wales. Before marrying Prince Charles, Diana worked as a preschool assistant and also had a job as a nanny. 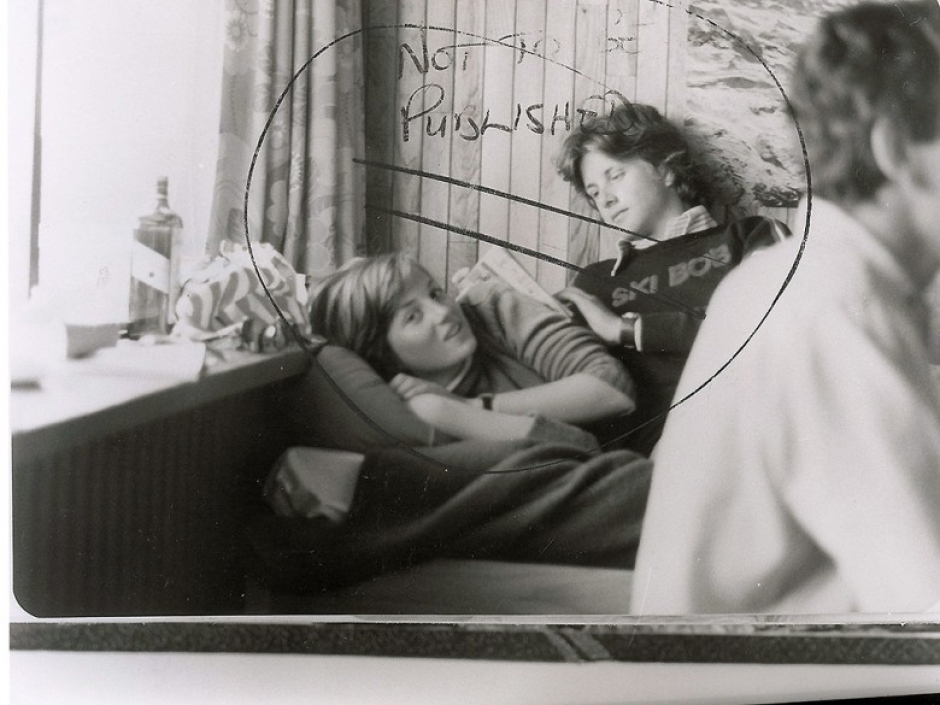 Prince Charles kisses the hand of his bride on the balcony of Buckingham Palace on July 29, 1981, after their wedding at St. Paul’s Cathedral. Their wedding day was a national holiday in Britain. 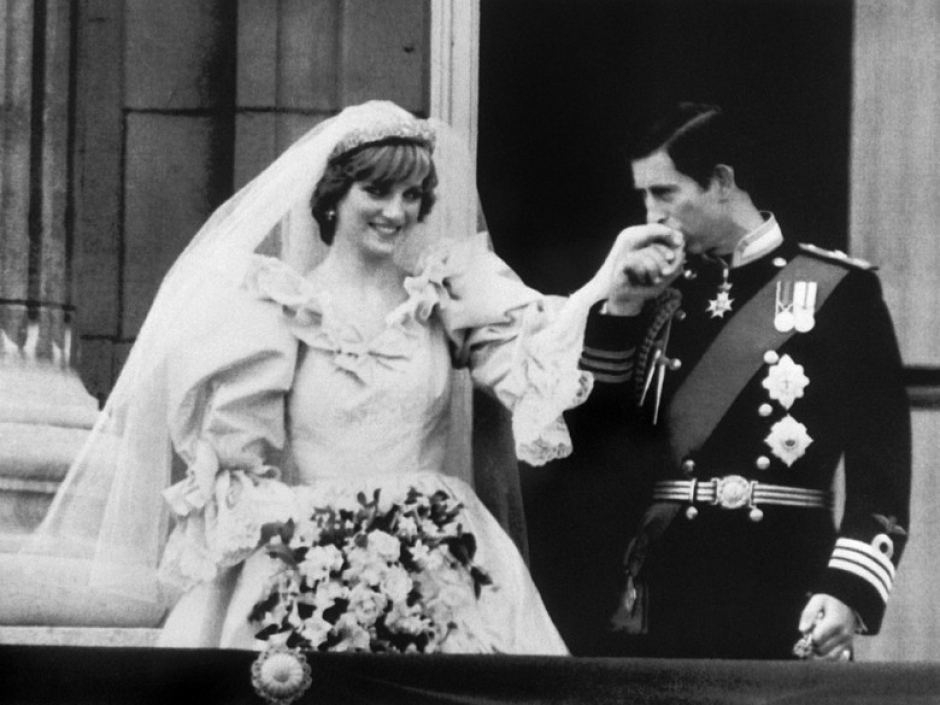 Charles and Diana leave St. Mary’s Hospital with their newborn son, Prince William, on June 21, 1982. The CBC reported at the time that the arrival of the new prince cemented the love Britons felt for his mother. 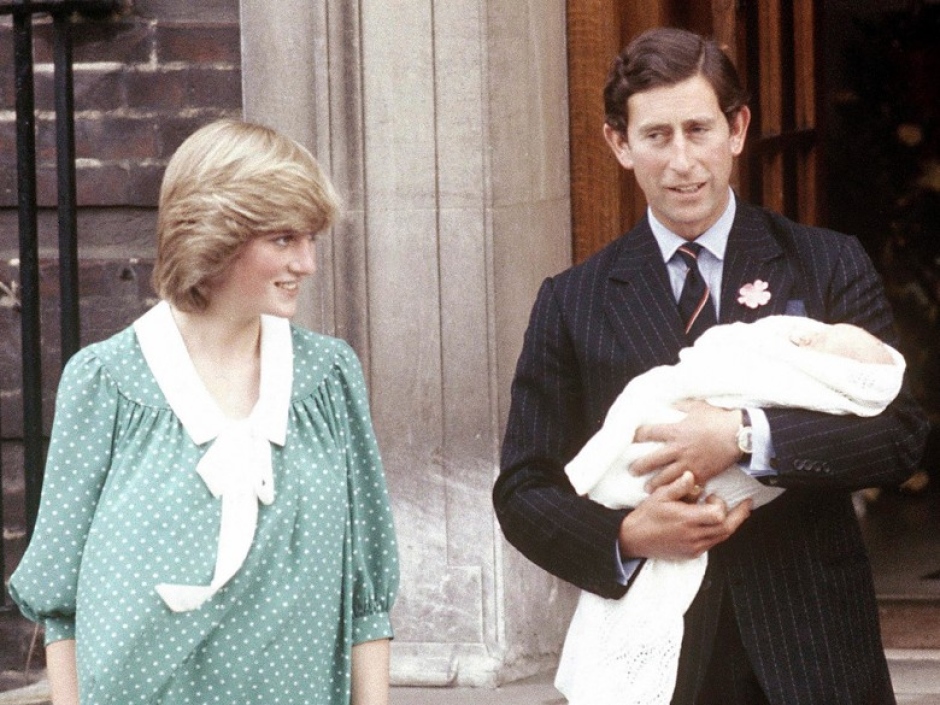 Charles, Diana and their son William pose for a family portrait at Kensington Palace in 1982. 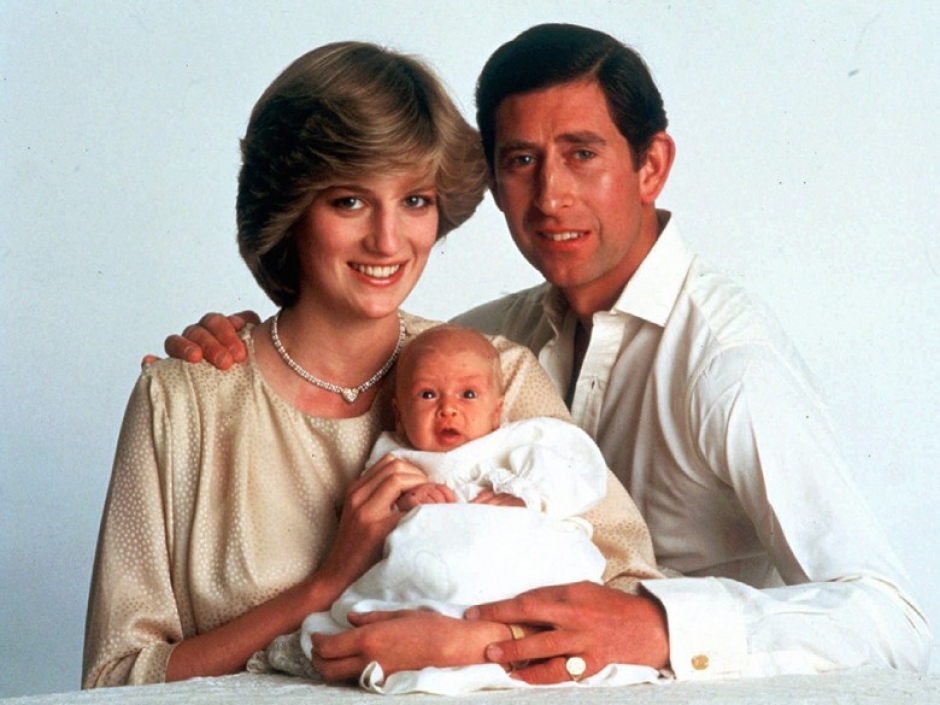 Diana holds Prince Harry as her older son, William, smiles at the camera, left, during the Queen’s 1988 birthday parade. Harry opened up this year about struggling with mental health after his mother’s death. 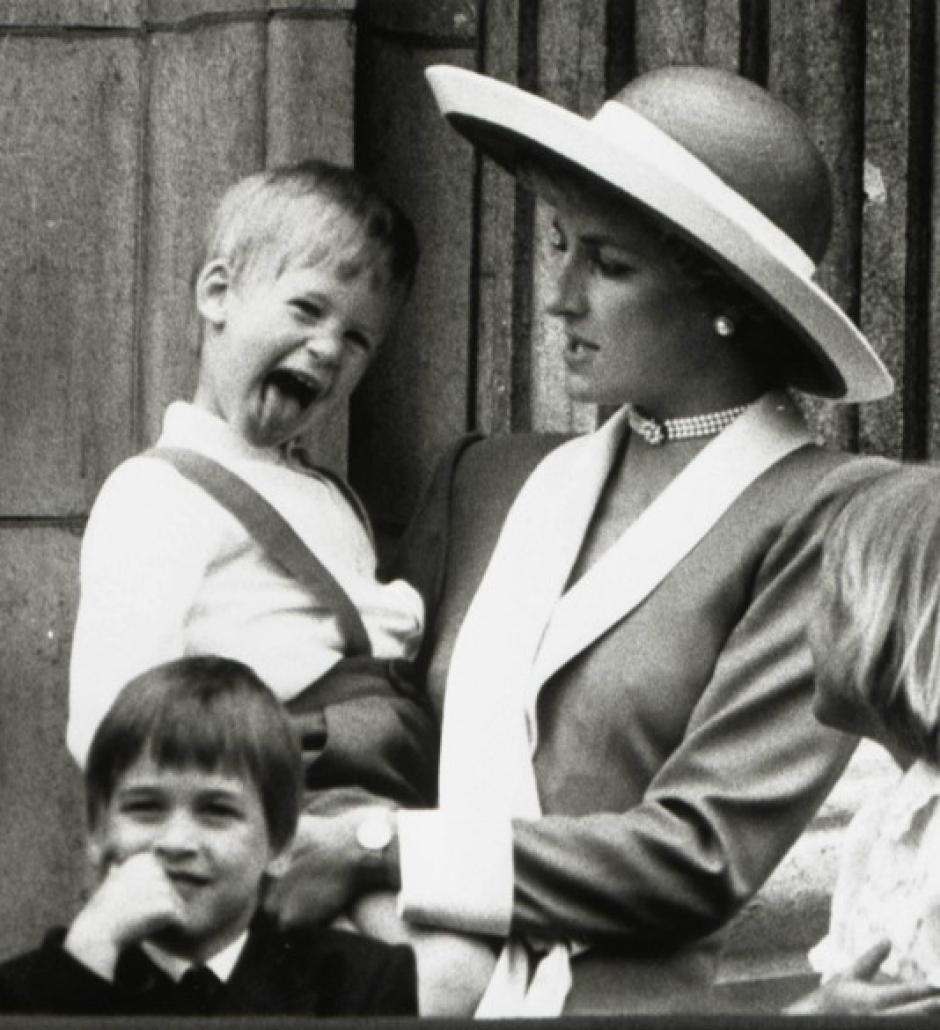 Diana and Charles look in different directions during a Korean War commemorative service in November 1992. The couple separated a month later and divorced in 1996. 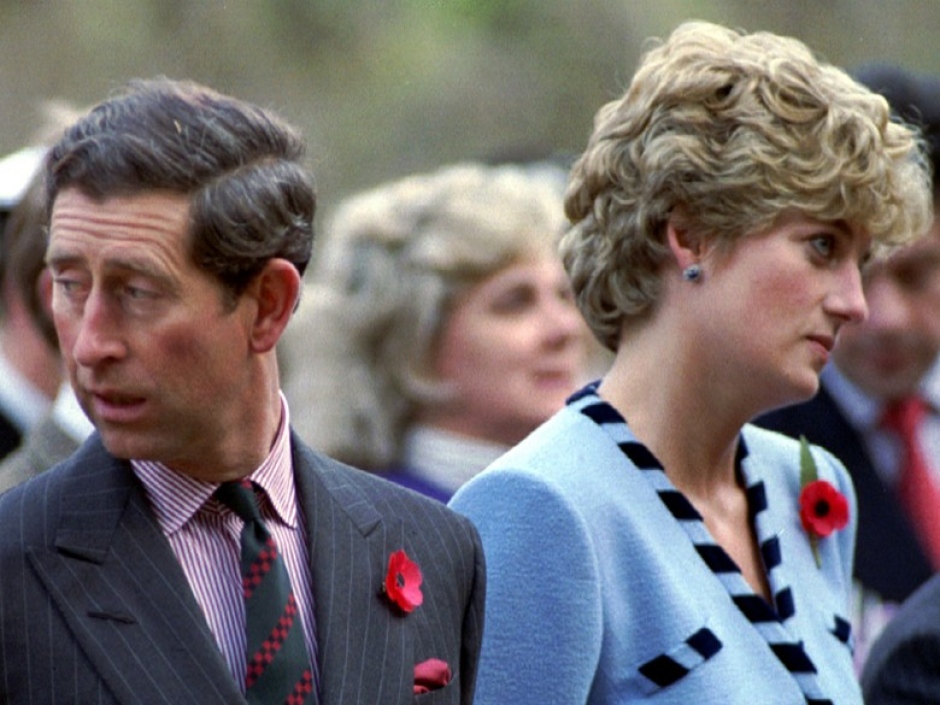 Diana discusses her marital troubles, the royal family and the press with the BBC’s Martin Bashir in 1995. She admitted to an extramarital affair with her riding instructor, James Hewitt, during the hour-long interview.

A year earlier, Charles admitted to an affair with Camilla Parker-Bowles in an interview with the BBC. He and Parker-Bowles married in 2005, after Diana’s death. 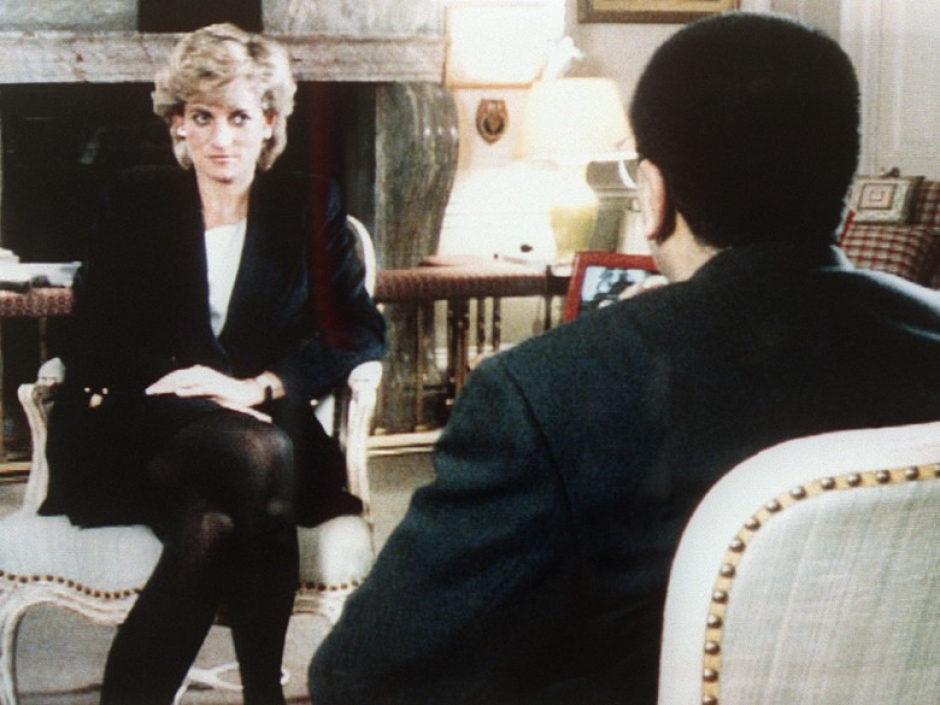 Diana reaches out to touch a young unidentified cancer patient during her visit to Lahore, Pakistan, in 1996. She became deeply involved in charity work as she grew older and used her media presence to advance causes she believed in, including children’s cancer research and AIDS treatment. 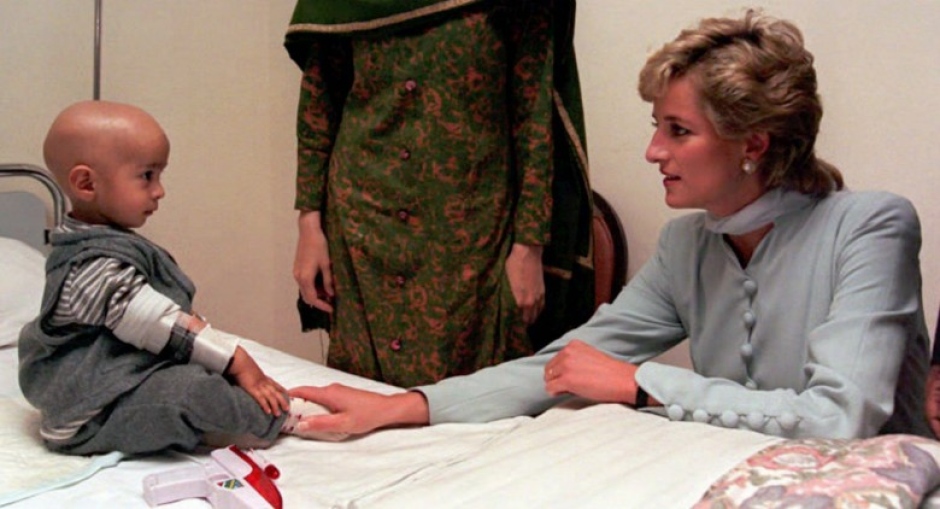 Diana wears protective gear while visiting Angola in an effort to raise awareness about landmines in the country in 1997. 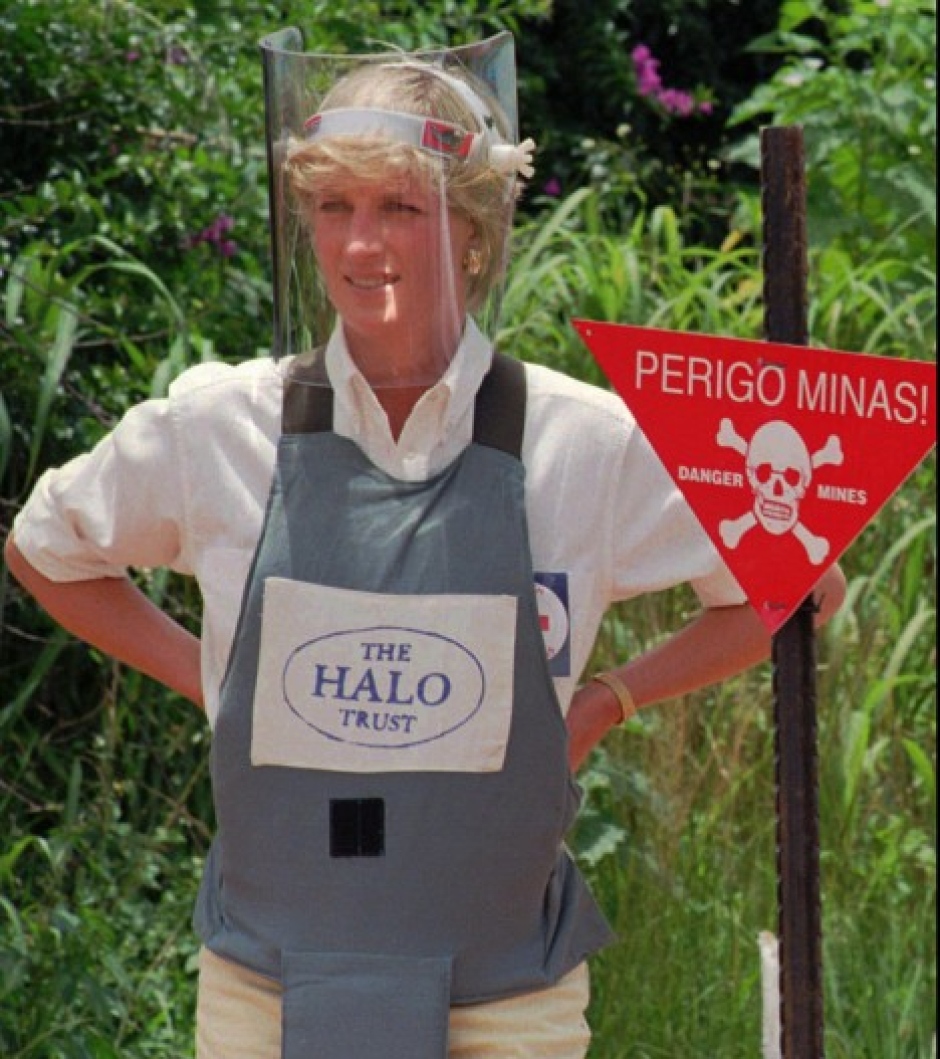 Diana meets Calcutta’s Mother Teresa at the Missionary Sisters of Charity residence in 1992. 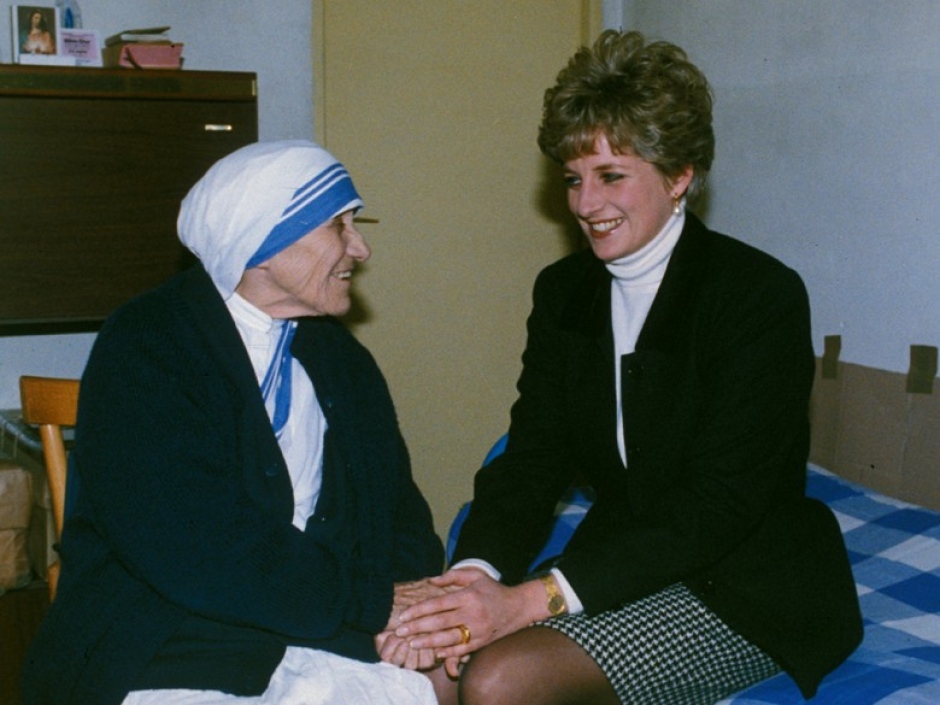 Diana became an international fashion icon over the years. The dresses she wore to meet diplomats and movie stars are on display in London this year, with organizers saying she deployed “fashion as a diplomatic tool.”

In the photo below, Diana smiles during speeches in London in 1993. 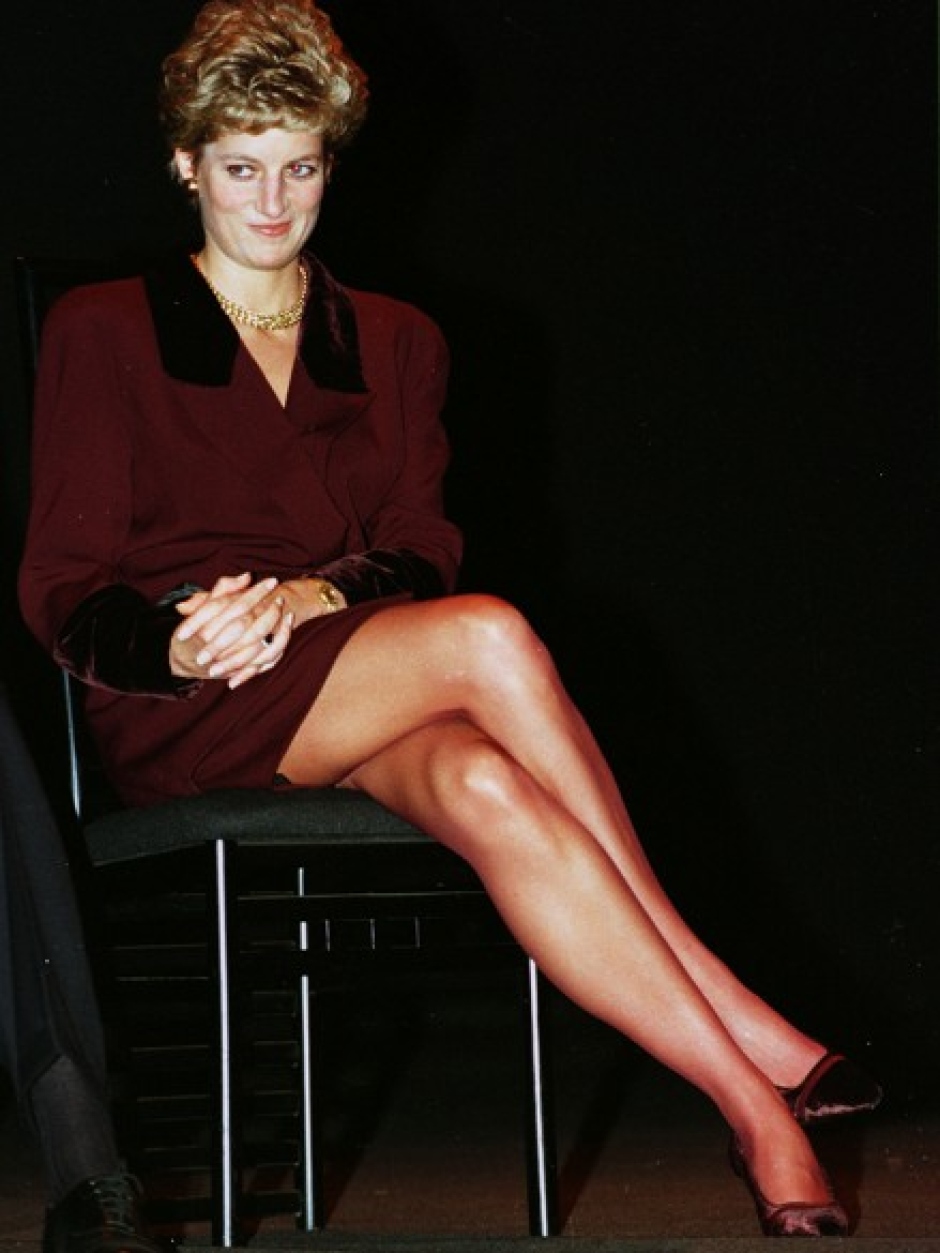 She also appeared in iconic photographs outside of official outings, like the one below taken during a holiday on the Caribbean island of St. Kitts in 1993.

Meeting with foreign dignitaries and celebrities

Diana first visited Canada in 1983. She is shown with then-Prime Minister Pierre Trudeau during ceremonies on Parliament Hill in Ottawa. 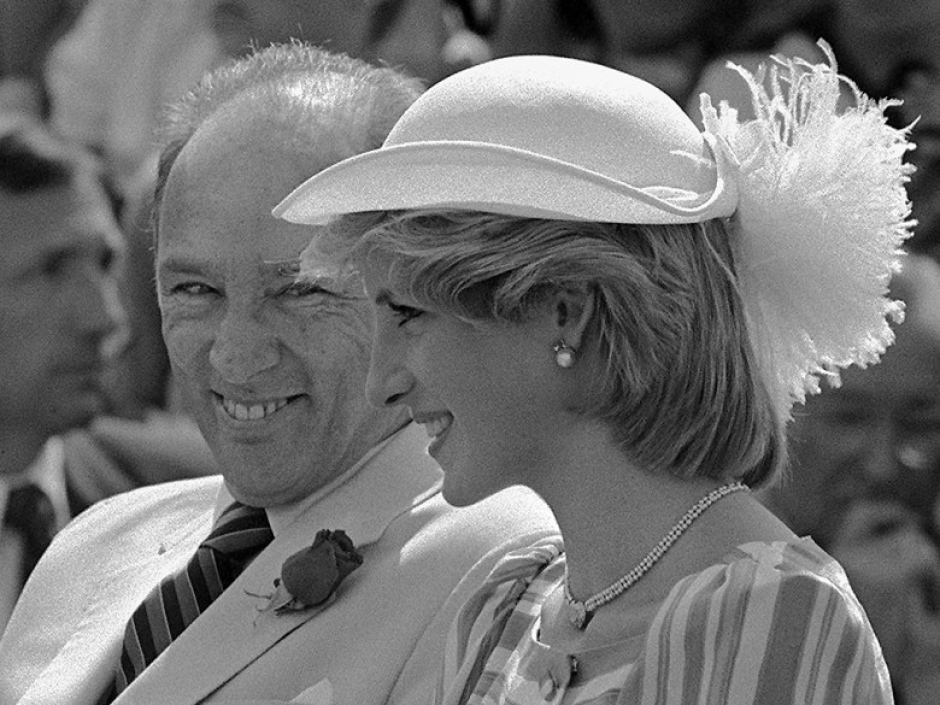 Diana cuts a cake to mark the tenth year of the Prince’s Trust rock concert at Wembley Stadium in 1986. Charles, left, watches her along with rockers Phil Collins, Tina Turner and Rod Stewart. 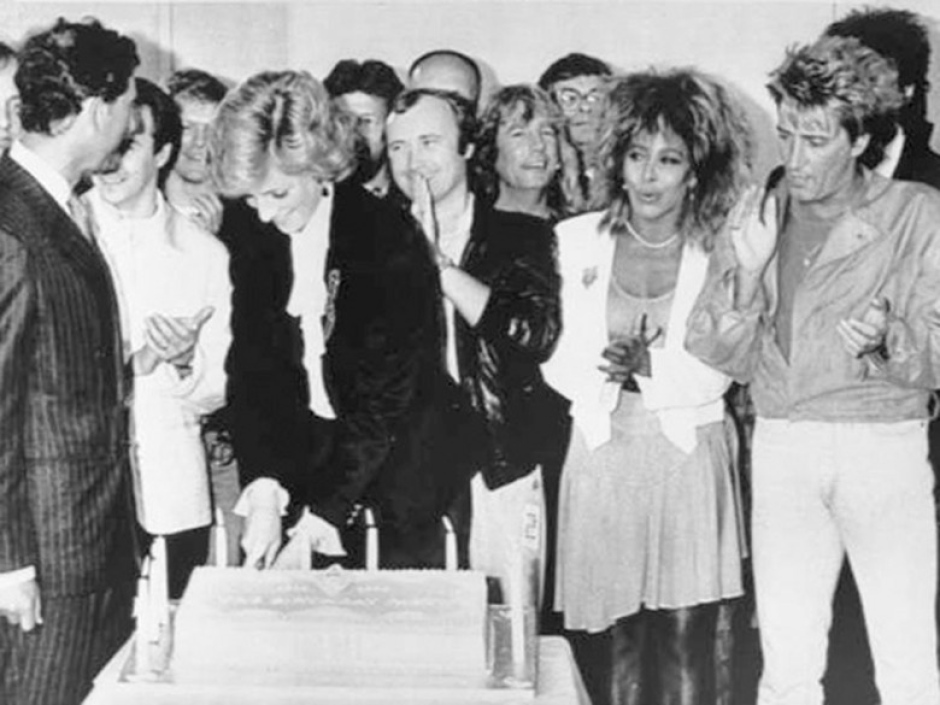 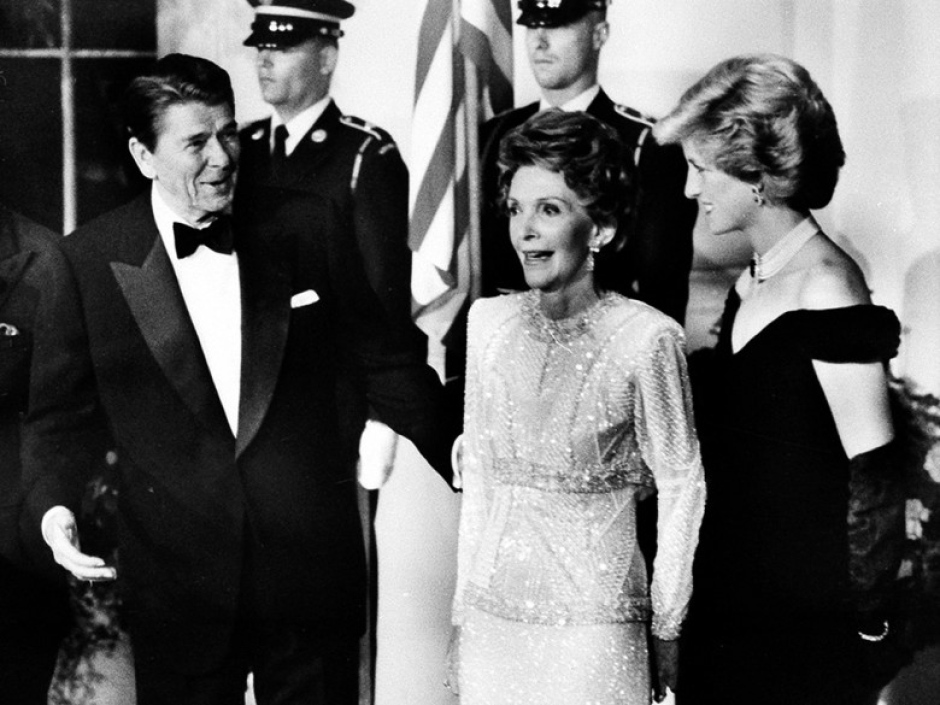 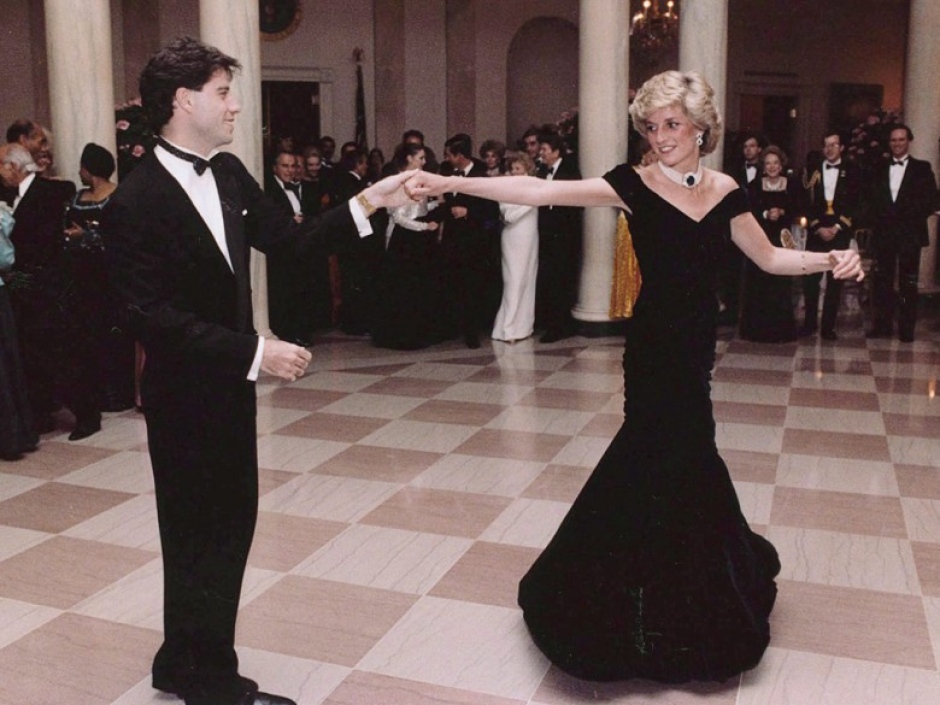 Diana bites her lip, overcome by emotion, in 1992 after claims she had tried to commit suicide were published in the biography Diana: Her True Story. 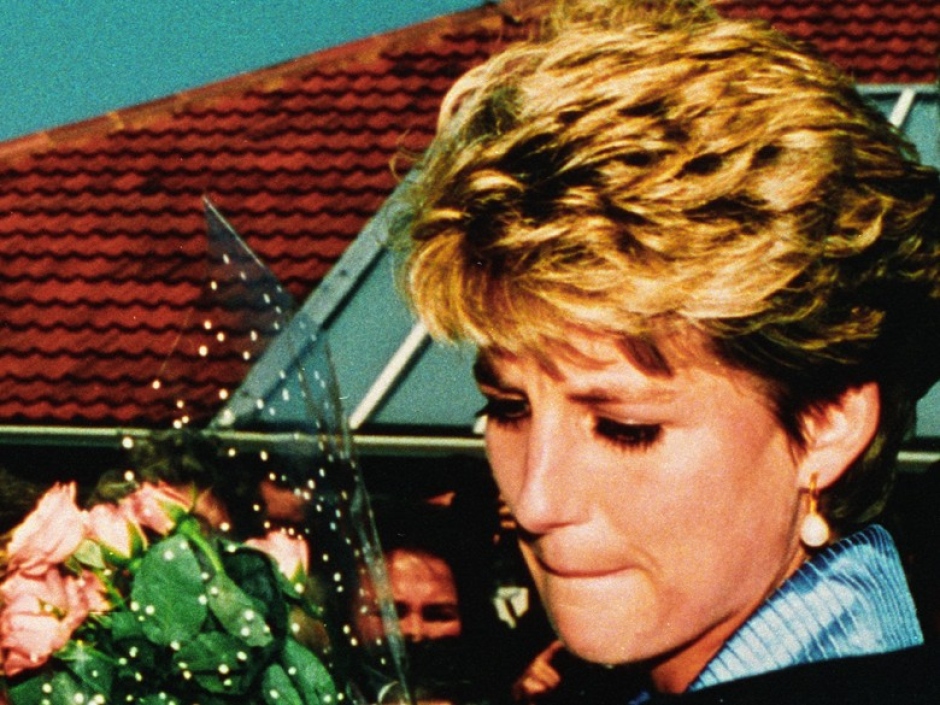 Diana is shown inside an elevator at the Ritz Hotel in a still image from the Paris hotel’s closed-circuit television shortly before her death on Aug. 31, 1997. She was killed in a car crash along with her millionaire companion Dodi Fayed and a chauffeur as they attempted to elude paparazzi. 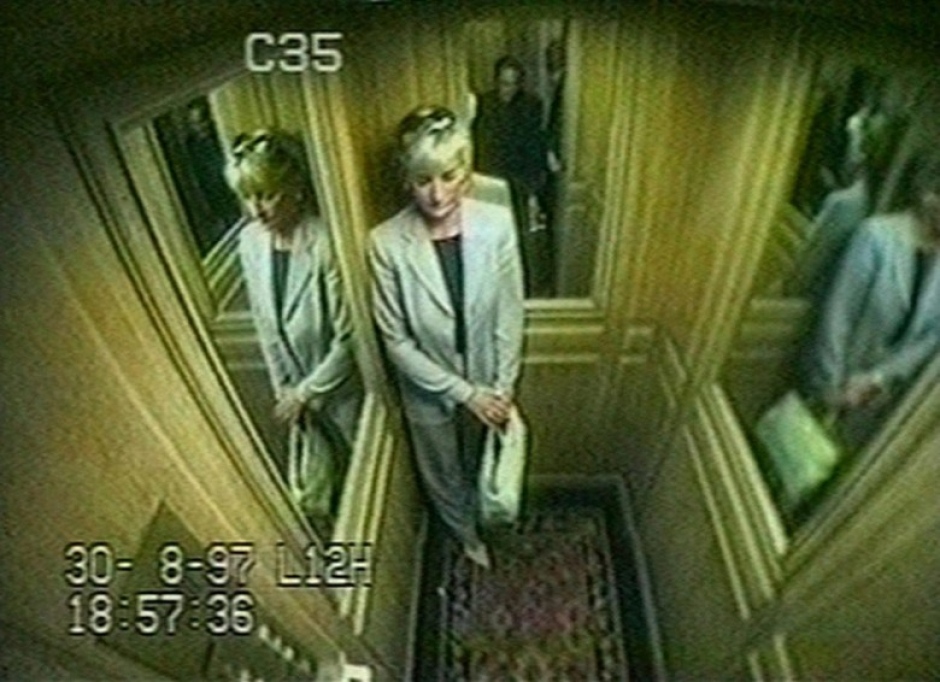 A photograph and flowers are laid at the gates of Buckingham Palace the morning after Diana’s death, which shocked the world. The funeral service at Westminster Abbey was attended by 1,400 dignitaries, and two billion people watched on TVs around the world. 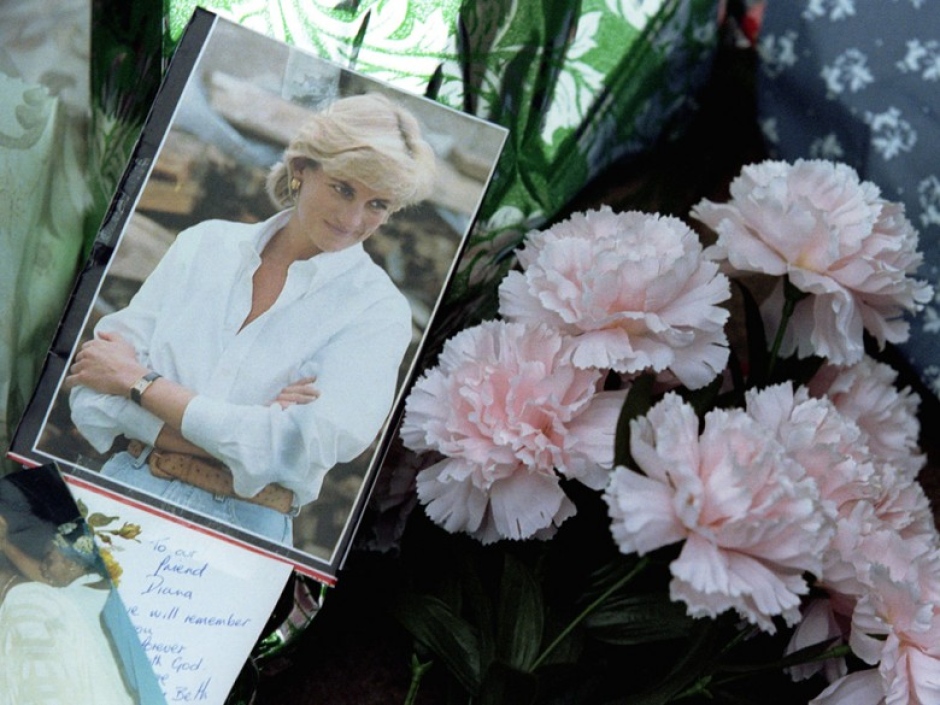