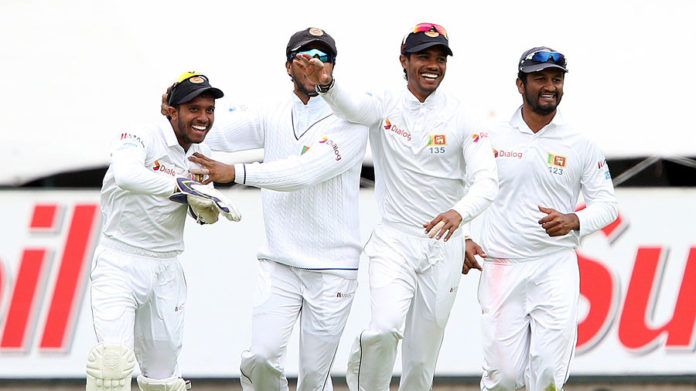 It is a record that may never see the light of the day.

Kusal Mendis and Dinesh Chandimal split the wicketkeeping duties during South Africa’s first innings at Newlands. Chandimal had suffered a fever leading into the match and the Sri Lanka management decided not to overburden him on the opening day. But he was back behind the stumps on the second morning.

Between them, Mendis and Chandimal grabbed seven catches as South Africa were bowled out for 392. That created a quirky statistic: seven is the most catches held by a keeper in an innings but, of course, this haul was shared between two men. The record number of dismissals for Sri Lanka is six, held jointly (and aptly) by Chandimal and Amal Silva.

The same thing happened in 1977, between West Indies and Pakistan in Jamaica, when Majid Khan spent time behind the stumps in place of Wasim Bari who later returned and the pair took seven catches between them in the second innings.

In Cape Town, Mendis took three catches on the opening day – including a sharp leg-side snaffle to remove JP Duminy – then Chandimal had a hand, in every sense, in each of the four wickets to fall on the second morning. He did especially well to get forward for a low catch offered by Quinton de Kock.

Sri Lanka are blessed with a stack of wicketkeeping options. There is another in this current XI – opener Kaushal Silva has played three Tests as the designated keeper – and they omitted a fourth gloveman, Kusal Perera, who had played in the opening Test. A case of many hands making light work?