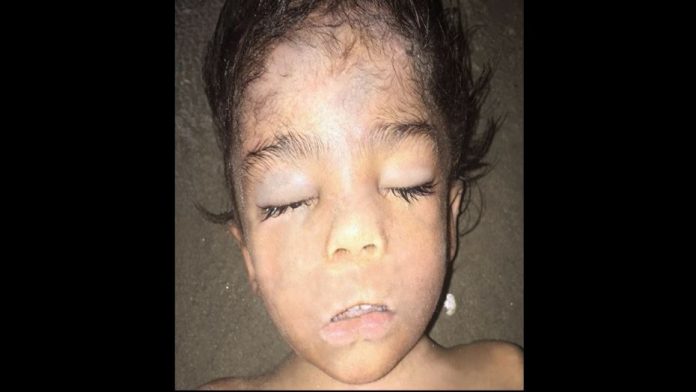 Investigators released a photo of the dead child, dubbed “Little Jacob,” after remaining unidentified for more than three months.

With a dead child still unidentified after more than three months, investigators in Galveston, Texas, took the unusual step Tuesday of releasing a photo of the corpse, dubbed “Little Jacob,” in hopes of generating new leads.

Police have determined that the boy, whose body washed ashore Oct. 20, did not die of drowning, and showed signs of malnourishment and past abuse.

“We’re not releasing this photo lightly. It’s really being done, at this point, as a last option,” police Capt. Joshua Schirard said at a news conference Tuesday, the Dallas Morning News reported.

With hundreds of tips to police failing to yield the desired results, authorities made the unusual decision in consultation with the FBI, U.S. Coast Guard and Texas Child Protective Services, the Houston Chronicle reported.

DNA and fingerprint analyses in an effort to identify the boy have also come up short, ABC13 in Houston reported. Children as young as Little Jacob typically do not have DNA or fingerprints on file, the Chronicle reported.

Police said the photo of the boy’s face was taken shortly after his body was found. The image was edited slightly to remove signs of decomposition, to make it easier for the public to see, they said.

Previously, a police sketch artist drew a portrait of the boy that was widely released in news outlets, on billboards from Texas to Kentucky and through national missing children’s foundations.

“We’ve exhausted all of the other things we can do. This was not up there with anything anyone wanted to do or would have chosen to do in any other instance,” Schirard said.

Police have estimated that the boy was 3 or 4 years old and weighed 26 to 30 pounds, which is about half the healthy weight for his age, the Morning News reported. They added that an autopsy showed previous signs of neglect and injuries consistent with abuse, but the child’s cause of death is still undetermined.

There were no signs of an illness or physical injuries that would been fatal, officials said.

Police officials declined to elaborate on other specific signs of abuse, the Chronicle reported.

Schirard said Galveston police worked with the U.S. Coast Guard and National Weather Service to determine that the boy’s body had been placed in the water locally between 12 and 48 hours before he was found, likely east of that location given the tide. He said the autopsy suggested the boy had died around Oct. 17 or 18.

Schirard told the Morning News that input from the community was “absolutely crucial” to the investigation.

“Someone out there knows this child,” he said. “Someone has seen him. This child deserves to be properly laid to rest.”

The FBI is offering a $10,000 reward for information leading to the identification of the family or caregiver of the boy.