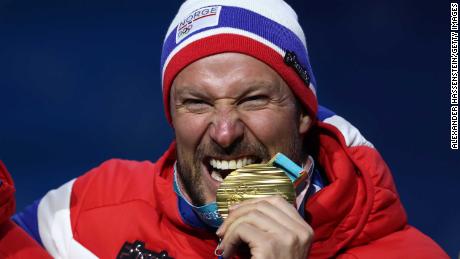 The 35-year-old beat close friend and countryman Kjetil Jansrud into silver with Swiss world champion Beat Feuz in bronze in what is often considered the blue riband event of the Winter Olympics.

Svindal has been one of the dominant speed skiers of his generation with multiple world titles and World Cup crowns as well as Olympic super-G gold, downhill silver and giant slalom bronze in Vancouver in 2010.

Olympic downhill gold had always eluded him, but on a perfect day at the Jeongseon Alpine Centre after a week of high wind and delays, Svindal edged Sochi super-G champion Jansrud by 0.12 seconds with Feuz 0.18 secs back.

“When you cross the finish line and you see that you’ve had a good race and you’re in the medals or even for the gold, you don’t think too much about the history books,” he told reporters afterwards.

“It’s emotional, and being in the Olympics and competing for gold and being able to get it, for me at least those feelings are much stronger than any history ever written.”

Downhill legend Franz Klammer told CNN in the build-up to the Games a skier’s greatness was judged on whether they won Olympic gold and said he would have judged himself a “failure” without it.

But the margins are miniscule.

Svindal missed out on downhill gold in Vancouver by 0.07 seconds behind the winner, Didier Défago of Switzerland, and was only 0.02 secs ahead of Miller in bronze.

He could only finish fourth in downhill in Sochi after carrying Norway’s flag at the opening ceremony.

Since then has endured a string of serious injuries which have forced him to miss large chunks of the World Cup circuit.

He suffered a season-ending crash at Kitzbuehel in 2016 and missed the following season after knee surgery.

This season he has scored three times World Cup wins, but still has to limit his training time to manage his knee.

READ: Inside the mind of a downhill racer
READ: Best photos from day 6 in Pyeongchang

Svindal admitted in the afterglow of winning gold that his illustrious career was drawing to close.

“I guess this is the beginning of the end somehow, definitely my last Olympics. Nothing is 100% sure but that’s very, very close to being 100% sure,” he added.

The Sochi downhill gold medalist, Matthias Mayer of Austria, finished ninth to continue the streak that no one has won back-to-back men’s downhill titles in the 70-year history of the event at the Winter Games.

The men’s speed skiers will contest the rearranged super-G at the Jeongseon Alpine Centre Friday.