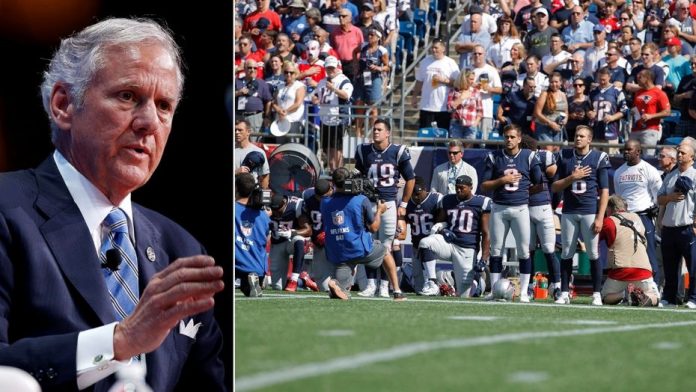 This Sunday won’t just be Super Bowl Sunday, according to South Carolina Gov. Henry McMaster. It will also be a day to stand for the national anthem.

So McMaster has declared the day “Stand for the Flag Super Bowl Sunday.”

McMaster, a Republican, issued a proclamation to that effect Tuesday as the world waits to see whether players from the New England Patriots and Philadelphia Eagles will take a knee during “The Star-Spangled Banner” this weekend.

“Standing for the national anthem recognizes and honors the sacrifice of generations of men and women who have chosen to serve in the United States Armed Forces,” McMaster said. “I ask that all South Carolinians show the world our state’s resolute commitment to supporting our troops by standing for the national anthem wherever you watch the Super Bowl with your loved ones this Sunday.”

The governor’s decision was quickly blasted on social media, according to South Carolina newspaper the State. Some took exception with the policy, while others criticized McMaster for not doing more for veterans.

A South Carolina restaurant was also feeling the heat after deciding to have an “Honor Bowl” in lieu of airing the Super Bowl.

David McCraw, an Air Force veteran and owner of the Palmetto Restaurant and Ale House in Greenville, told Fox News on Tuesday he is still boycotting the NFL.

“My feelings are basically the same as they always were,” McCraw said. “I find it disrespectful to the people who fought for this country — their coffins are draped in this flag.”

McMaster’s proclamation comes as a tumultuous NFL season winds down. It was a year that saw President Donald Trump reignite the national anthem controversy, suggesting that NFL players should be fired if they participate in national anthem protests.

The game between the Patriots and Eagles is set for Sunday at U.S. Bank Stadium in Minneapolis.