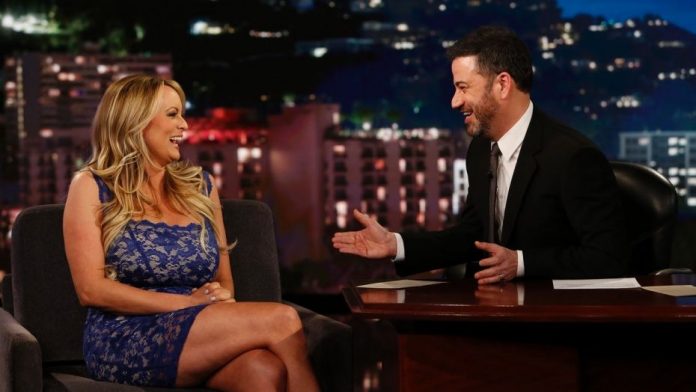 Adult film star Stormy Daniels stoked more controversy Tuesday night, suggesting that maybe it wasn’t her signature on a statement denying she had an affair with Donald Trump prior to the 2016 election.

During an appearance on “Jimmy Kimmel Live,” the host raised doubts about the signature after comparing it to past Daniels autographs, the New York Daily News reported.

“That does not look like my signature, does it?” she replied.

Daniels even claimed she had no idea where the statement came from, according to the paper.

Previously, the Wall Street Journal had reported that Trump’s personal lawyer, Michael Cohen, paid Daniels $130,000 one month before the 2016 presidential election to keep the alleged affair from going public.

But following Daniels’ appearance on Kimmel’s show, BuzzFeed reporter Anthony Cormier confirmed that the signature was Daniels’, tweeting that her lawyer told him “Stormy did indeed sign both denials,” and that “she was having fun on Kimmel and being her normal playful self.”

Some have pointed out differences between a signature on the statement provided to BuzzFeed and a letter previously obtained by Fox News, which also denied any rumors of a romantic involvement between her and Trump.

Despite the differences, TMZ reported a representative for the adult film star confirmed that both signatures were hers.

During the rest of the interview, which followed President Trump’s State of the Union address, Kimmel played a game of “Never Have I Ever” with Daniels, to elicit whether she had ever slept with a married man at a golf tournament, or if she has ever had sex with a man whose name rhymes with “Lonald Lump,” the Daily News reported.

Daniels denied answering any specifics to the alleged affair but did tell Kimmel that a supposed meet-up between the two was an “unpleasant picture,” according to the paper.