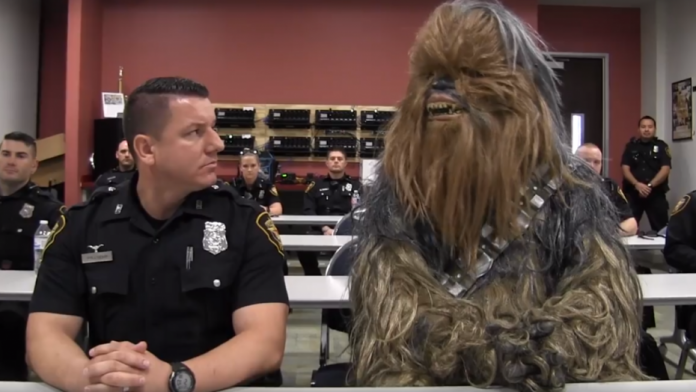 In a framegrab from the video starring Jimmy and Chewbacca, the pair show what a typical day on the force looks like.

A police force in Texas got creative with a Star Wars-themed video, starring Chewbacca as a new recruit.

The video released Wednesday by the Fort Worth Police Department started with roll call and the distribution off assignments.

“Jimmy. You get the Wookie,” an officer at the front of the room said. “I’m sorry. Did you say the rookie?” Jimmy replied.

“No. The Wookie,” the officer said, before the camera cut back to Jimmy staring at his new partner.

But in a seemingly normal day of activities for the twosome, the Wookie’s unique skill set didn’t appear to translate that well to the world of law enforcement.

A routine traffic stop ended with Chewbacca shaking a woman’s car, practice time at the firing range led to an out-of-this-world explosion and combat training left another officer at a bit of a disadvantage.

Jimmy also had an issue with the Wookie after he didn’t clean his hair out of the shower drain.

And in an ode to the fallen Han Solo, Jimmy attempted to console a sad Wookie during lunch.

“Hey… I’m sorry about Han,” Jimmy said. As a distraught Chewbacca got up and left, the officer shouted, “You wanna talk about it?”

Inspired by the dramatic opening scroll of the Star Wars movies, the department closed its video in a similar fashion.

“Attention Wookies!” it began, before making a quick edit.

“Attention Rookies!” it read. “Welcome to the Fort Worth Police Department!”

“Remember to always show courtesy and respect to our citizens and always provide professional service.”

“And may the force be with you!”

The video has received a lot of praise online, gaining more than 4,500 reactions and shares on Facebook.