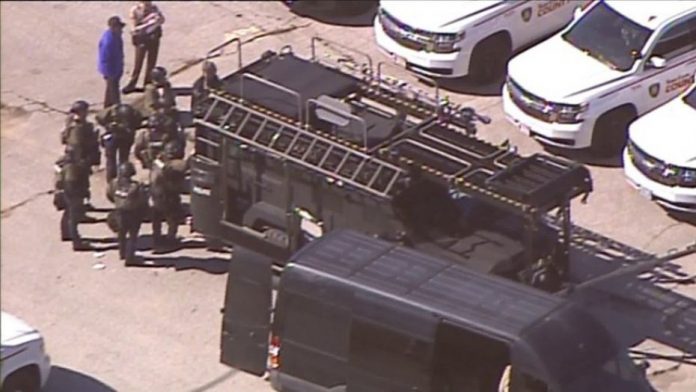 A SWAT team arrives amid a standoff in northeast St. Louis County with a gunman who shot a U.S. Marshal.

A U.S. Marshal was reportedly shot in the chest while trying to serve a search warrant Monday at a home in northeast St. Louis County, prompting a brief standoff with police and a SWAT team.

The marshal, who is currently being treated at a hospital, is believed to be “OK” and a bulletproof vest he was wearing stopped the bullet, a source told KTVI.

The U.S. Marshals Service told the station the suspect opened fire at officers as they got out of their vehicles in the Glasgow Village area, and they returned fire.

The shooter, identified by the St. Louis Post-Dispatch as William Watson Jr., is wanted for first-degree assault and domestic assault.

An arrest warrant was issued for Watson after he failed to show up at court in November following a domestic assault conviction in September.

During the trial, a woman testified that Watson choked and body-slammed her, while Watson said she came at him with a knife.

Live images broadcast by KTVI showed a heavy police presence and a SWAT team in the area.

It was not immediately clear if the suspect is in custody and what his condition is.