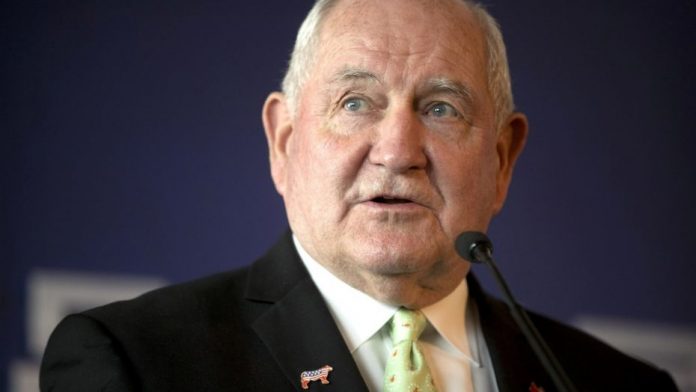 Agriculture Secretary Sonny Perdue was named as the designated survivor for President Trump’s first State of the Union address.

During Trump’s speech, Perdue will be taken to a secure location away from the U.S. Capitol. As part of the administration’s Cabinet, Perdue was sworn in to lead the U.S. Department of Agriculture in April 2017.

Here are five things to know about Perdue.

Perdue, 71, was born as George Ervine Perdue III. However, he uses his nickname “Sonny” in his official capacity.

Perdue was born and raised in Georgia and went on to become the Peach State’s 81st governor in 2003.

Perdue also served as a state senator, initially as a Democrat. He joined the Republican Party in 1998.

“We Are Marshall” was filmed in Georgia.

4. He is a former veterinarian and college football player.

He also played football as a walk-on for the University of Georgia.

5. Perdue has four children and was a foster parent to numerous others.

Perdue and his wife, Mary Ruff, have four children and fostered eight newborns awaiting adoption, according to his Georgia governor biography.