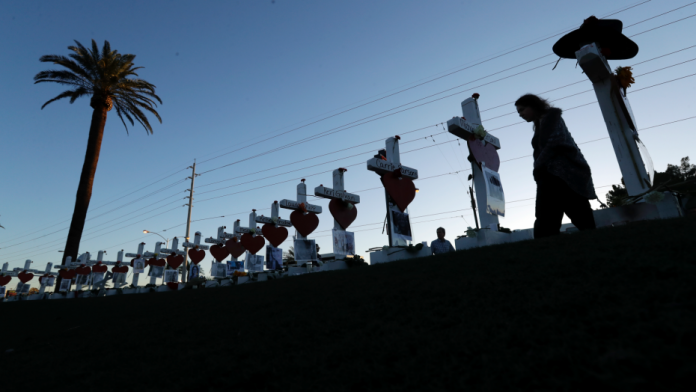 LAS VEGAS –  Some victims injured in the mass shooting at an outdoor music festival in Las Vegas on Tuesday asked a committee in charge of distributing millions of dollars in donations to rework a plan to divide the money.

The request came during an emotional meeting in which some victims cried as they described their injuries and recounted how they escaped the deadliest shooting in modern U.S. history.

The 16-member committee is gathering public input on the plan through town halls, mail and email before it is finalized.

The current proposal calls for the roughly $16 million donated to be distributed to relatives of the people killed and to those who were hospitalized. Injured victims who were not hospitalized told the committee they should be compensated, too.

“I may not have had a bullet put in my body, but I feel like a bullet has been put in my head, and in my soul and my heart — and my life is forever changed,” Michelle Leonard, a vendor at the music festival, said as she sobbed.

Her leg was injured when she was trampled trying to escape the gunfire and she is unable to be on her feet.

A high-stakes gambler killed 58 people and injured more than 500 on Oct. 1 when he opened fire from the Mandalay Bay hotel-casino on the country music festival before killing himself.

Donations for the victims began to pour in within hours of the shooting. A GoFundMe page has collected about $11.5 million. More money was collected by the Direct Impact Fund, a nonprofit affiliated with GoFundMe, and the National Compassion Fund, which was created by victims and families of mass casualty events.

Other funds have used the length of hospital stays to determine the amount of money provided to injured victims. And in the case of the shooting at the Pulse nightclub in Orlando, Florida, people who received outpatient treatment and those who were uninjured also received part of the donations.

Under the plan for Las Vegas victims, most of the money would go to relatives of those killed or victims whose injuries left them with permanent brain damage or paralysis, requiring constant home care.

Scott Nielson, president of a consulting firm and former executive at Station Casinos, is heading the committee. He said the group “will definitely make some changes to the draft protocol.”

But striking a balance will not be easy given the number of victims. While there were more than 300 people inside the Orlando nightclub and over $29.5 million raised in donations, 22,000 people were present at the Las Vegas venue.

“You want to acknowledge that every single person who was there counts as a victim,:” said Jeff Dion, who led the Tuesday town hall and is deputy director of the National Center for Victims of Crime. “But at the end of the day, because of the amount of money that’s raised and the number of people that were impacted, we give them a check for $27? I think that almost feels insulting.”