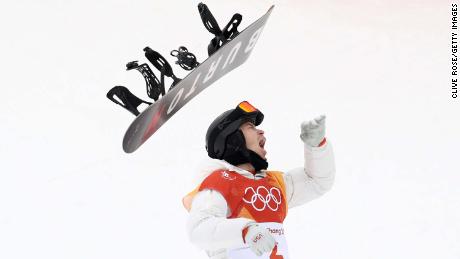 The 31-year-old pulled off an epic final run to avenge the disappointment of missing out on a medal four years ago and add to his legacy following golds in Turin in 2006 and Vancouver in 2010.

But as the last man down he responded in emphatic fashion with a run he had never unveiled before to become the most successful Olympic snowboarder of all time.

“I’m sure you can tell by my reactions at the bottom of the pipe, but this meant the world to me, and my family, and my team,” said White, who has also won multiple X Games gold medals in snowboarding and skateboarding since turning pro as a 13-year-old.

“Here doing it for USA again, not only to be an Olympian again, but to be a gold medalist again is unreal.

“I’m proud of myself. I don’t say that often, you know, it’s like I try to bury it down in there so I can stay motivated and hungry for the next competition cause that’s just how I do things, but I’m really taking this moment to be proud and thankful, and yeah, it feels great.”

White scored a remarkable 98.50 out of 100 to lead after qualifying, and maintained his momentum with a top score of 94.25 in the opening round of Wednesday’s final.

But Hirano went in front in run two with a score of 95.25, which included back-to-back 1440s — two consecutive jumps spinning through 1440 degrees — seen as one of the hardest tricks in the sport.

White fell on his second run, but saved his best for last and included his trademark double McTwist 1260 alongside his own back-to-back 1440s for the first time in competition to score 97.75.

Afterwards, he credited his rivals, including Australian Scotty James who took the bronze, with keeping him on his toes.

“Ayumo put down an amazing run, and I knew I had to step it up,” White told the BBC. “Last run, pressure was on and I put it down, it was great.

“I am really thankful for those guys, because honestly, they pushed me to get to this point, to do these kind of runs.”

White lost his passion for the sport after the disappointment of Sochi and took time out to pursue his business interests and play in his band.

But back on the Olympic trail, he also had to overcome the physical and mental scars of serious injury.

While training for Pyeongchang in New Zealand in October, White crashed on the lip of the halfpipe and suffered serious facial injuries which required 62 stitches.

“He ripped his face in half, more or less, and you can still see the scars,” the Associated Press quoted White’s coach, JJ Thomas, as saying. “And I don’t know if anyone else in this world has the mental strength to overcome that fear and lay it down on the world stage. It’s amazing. He’s legendary.”

White’s historic achievement was lauded by fellow Olympic legends, including swimmer Michael Phelps, sprinter Michael Johnson and gymnast Nadia Comaneci, the first gymnast to be awarded a perfect score of 10.0 at the Olympics.

The Americans had entered the Games with 96 gold medals. With the expected gold rush of skier Mikaela Shiffrin on hold for yet another day when high winds postponed the women’s giant slalom scheduled for Wednesday, all of its four gold medals in South Korea have so far been won in snowboarding.

“The milestone highlights Team USA’s sustained competitive excellence, dating back to the first Olympic Winter Games in 1924 in Chamonix, France,” the US Olympic Committee said in an emailed press release.

The US team now trails only Norway (118 going into PyeongChang 2018) in the total of Winter Olympics gold medals.

During a brief change of focus in White’s victorious press conference he was forced to confront previous allegations of sexual harassment by the former drummer of his band “Bad Things.”

The snowboarder has previously admitted to sending lewd text messages to Lena Zawaideh, and the parties later reached an undisclosed settlement.

Asked whether the accusations would tarnish his legacy, White said: “You know honestly I’m here to talk about the Olympics not gossip … but I don’t think so.”

“I am who I am and I’m proud of who I am and my friends, you know, love me and vouch for me and I think that stands on its own.”

White also apologized for appearing to trail the US flag through the snow during his celebrations.