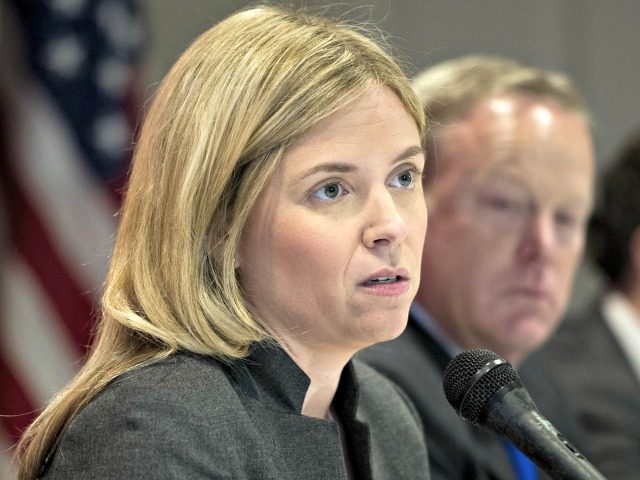 President Donald Trump is undergoing his first staff shake-up less than three months into his term, sending deputy chief of staff Katie Walsh to bolster the flagging outside groups that were meant to support his agenda, according to a Republican source close to the White House. The move caps a rough stretch for Trump, who has seen his young administration dogged by controversy, his travel ban executive order blocked twice in court, and a health care bill he supported go down in flames.

Walsh, Politico reports and independent sources confirm to Breitbart News, will now be serving as “an adviser both to a pro-Trump nonprofit and the RNC.”

Politico notes that Walsh is a “close ally of chief of staff Reince Priebus,” having served as his chief of staff at the Republican National Committee.

As you know, we’ve got a lot of senior folks in the White House who have a great ability to help push the president’s agenda and message and that’s Reince Priebus, Steve Bannon, Jared Kushner, KellyAnne Conway, and others, but there is a logistical piece of that that has to get implemented and so I try and help with that. So I try and do what I can to make sure the right hand is talking to the left hand and everyone knows what everyone is doing, and there is a cohesive operation or effort to make sure, whatever we’re doing, that nothing happens in a silo if you will. So even if Reince is with the president working on something, and Jared is working on an issue related to trade, and Steve is working on an issue related to immigration or something, we try and make sure everyone is still on the same page and working together and moving together as fast as we can.

But rumors surfaced online that Walsh was leaking information about the White House.

“Everyone knows not to talk to her in the White House unless you want to see it in the press,” Got News editor Charles Johnson quoted a “source close to the president” as saying in February. “The only question is whether or not she’s doing it at the behest of [White House Chief of Staff] Reince Priebus or if she’s doing it to advance herself in DC media circles.”

In a meeting with reporters, however, Priebus, Kushner, and Bannon all defended Walsh.

Just stepped out of meeting in Priebus office with Priebus, Bannon and Kushner on Walsh departure

During mtg Priebus, Bannon and Kushner all praised Walsh work during campaign and at WH. Jared: “One of the unsung heroes of the campaign.” https://t.co/mXZ6irox3b

Senior WH official: Walsh “not being fired.” Moving to outside C4 to beef up efforts to move agenda, keep GOP members in line. https://t.co/tb0nb8m8Td

During mtg Priebus, Bannon and Kushner all praised Walsh work during campaign and at WH. Jared: “One of the unsung heroes of the campaign.” https://t.co/mXZ6irox3b

Kushner on Walsh departure: “I’m very supportive of Katie and the sacrifice she is making.” https://t.co/F8A2rENVHK

Priebus insists Walsh needed on outside: “Nobody can fix this problem better than Katie Walsh.” https://t.co/ad0wg2tQsc

Bannon on Walsh: “She’s the vital link that pulls things together and makes things happen.” https://t.co/Jon62BpL7e

But Walsh’s quick departure in the first 100 days does not bode well for those responsible for bringing her in. Priebus, many reports in recent days and weeks have shown, is on the hot seat and may find himself in a similar fate to Walsh. Many Trump allies both inside and outside the White House believe that Priebus is not serving the president’s best interests, partially because of his loyalty to House Speaker Paul Ryan and partially because of his inability to deliver big ticket agenda items in the Trump White House and throughout Washington—as well as getting the Trump administration off the ground with basic government appointments filled.

One ex-Trump aide speculated to Breitbart News that Priebus is next.

“Reince Priebus is now a dead man walking,” the aide said. “The firing of Katie Walsh was a sign of desperation.”

Senior WH official: “Reince is not next. Reince is doing a great job”

Sources tell Breitbart News there may be more announcements coming soon as it relates to other senior staff inside the White House. White House press secretary Sean Spicer has not responded to a request for comment on the news that Walsh is being removed from the White House.