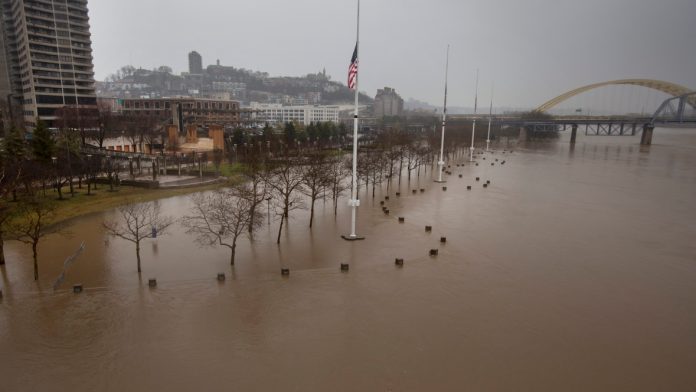 At least two people are dead as a strong storm system that included possible tornadoes pushed its way eastward through the central United States, leaving demolished homes, damaged vehicles and uprooted trees in its wake.

A man in northeast Arkansas and a woman in south central Kentucky both were killed as the storm that also included strong winds, hail and heavy rain that triggered flooding muscled its way through the area, according to authorities.

In northeast Arkansas, an 83-year-old man was killed after high winds toppled a trailer home. Clay County Sheriff Terry Miller told KAIT-TV that Albert Foster died Saturday night after the home was blown into a pond.

About 85 kilometres away, the weather service said the roof was blown off a hotel in Osceola, about 255 kilometres north of Memphis, Tenn..

Storm-related damage also was reported in Middle Tennessee, where Fox17 in Nashville reported extensive damage to homes and vehicles. Fox17 says at least a dozen homes were damaged in one Montgomery County subdivision.

Keener Township Volunteer Fire Chief Randy Woods said the breach was relatively minor when it was discovered about 3 p.m. Friday near Demotte, about 85 km southeast of Chicago. Local residents tried to sandbag the breach “to get it under control, but it just got bigger and bigger,” he said. Local firefighters were called to help them, but eventually everyone had to pull out for their own safety.

No injuries were reported.

The weather service said record flooding was occurring along the Kankakee following several days of heavy rains and snowmelt that sent streams out of their banks from the Ohio River to Michigan and Wisconsin. Flood watches and warnings spanned multiple states Sunday morning, from Missouri to central Pennsylvania, while a wind advisory remained in effect for nearly all of Lower Michigan.