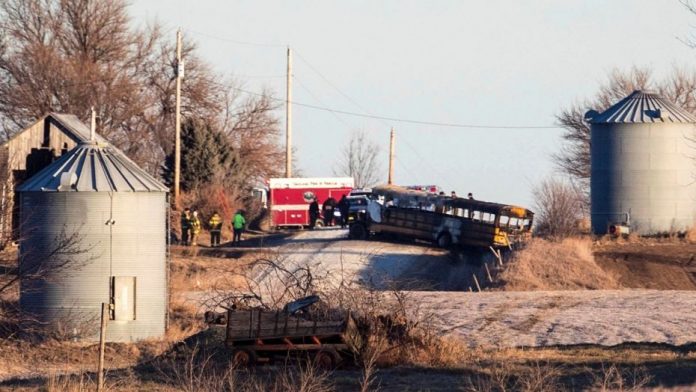 Investigators work the scene of a school bus fire that killed two people on Dec. 12.

A school bus driver and a student were killed early Tuesday when a school bus caught fire in western Iowa, officials said.

The incident occurred around 7 a.m. after the bus backed out of a farm driveway and ended up in a ditch in Oakland, located 35 miles east of Omaha, Neb.

The homeowner, also the parent of the child, called 911 and said the bus was in flames before fire crews arrived, KETV reported.

The remains of two people were found inside the bus after the fire was extinguished, Pottawattamie County Chief Deputy Sheriff John Reynolds told the Omaha World Herald.

The bus driver was a male, but officials told the newspaper they were not yet releasing the age and gender of the student.

Initial reports on the fire indicated as many as 20 people may have been on the bus at the time of the accident, but Pottawattamie County Sheriff’s Lt. Rob Ambrose told the Associated Press only the student and the driver were on the bus when it caught fire.

The bus was from the Riverside Community School District. The cause of the blaze is under investigation.