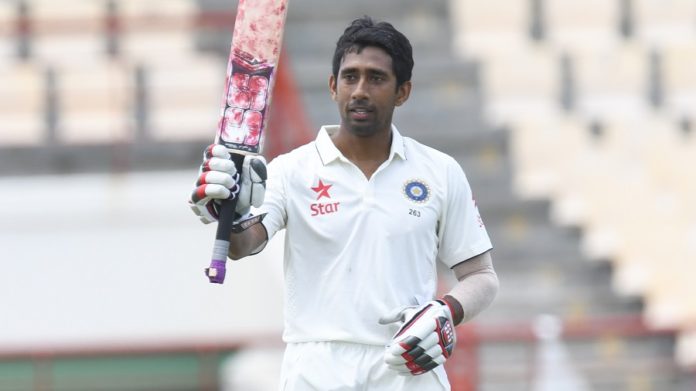 MSK Prasad, India’s chairman of selectors, has said Wriddhiman’s Saha’s glovework puts him above Parthiv Patel as the first-choice wicketkeeper in Tests.

Saha had a breakout tour of the Carribean last year, scoring 205 runs in four innings, including a maiden Test hundred. He backed it up with a pair of half-centuries against New Zealand at his home ground in Kolkata, where India secured the No. 1 ranking. A thigh strain in November forced him out of the team and his replacement, Parthiv Patel, impressed India’s captain Virat Kohli with a gutsy performance as an opener in Mohali and later captained Gujarat to their maiden Ranji Trophy championship.

A fit-again Saha and Parthiv then met in what was possibly an audition for the Test wicketkeeper spot in the Irani Cup at Brabourne Stadium. Prasad was in attendance to watch them both.

While Parthiv managed only 43 runs in the match, having been wrongly given out in the second innings, Saha recovered from a first-innings duck and to hit a career-best 203 not out to lead Rest of India to the title.

“Wriddiman Saha was out of the team because of injury and not because he was out of form,” Prasad told the Sportstar magazine. “He was the Man of the Match in the Kolkata Test against New Zealand and got a hundred in West Indies. I am happy how Parthiv [Patel] has responded to the call-up.

“He is a fighter to the core. He single-handedly brought Gujarat from nowhere to being the Ranji champion. He is among our scheme of things. There is just a minor difference between the two. When it comes to Test cricket, it is always the man who keeps better gets the nod.

“Parthiv’s glovework has definitely improved. But Saha has got better hands and that’s where he scores little more points than Parthiv. With today’s batting, Saha showed why he is the No. 1 keeper-batsman in the country. When he came out to bat yesterday, the team was struggling at 63 for 4 and to take the game away from Gujarat is phenomenal. So it’s a healthy competition between the two.”

Prasad was also pleased with the progress made by the Indian one-day team in addressing a weakness: “All said and done, we were a bit worried about the middle order during the New Zealand ODI series.”

But against England, Yuvraj Singh, who spent three years out of the ODI side, marked his return with a career-best 150 at the No. 4 spot. MS Dhoni hit a century in partnership with him from No. 5 whereas Kedar Jadhav at No. 6 showed his range and mettle with a hundred in India’s come-from-behind win in Pune and followed it with a thrilling 90 at Eden Gardens.

“[Recalling] Yuvraj was definitely not a gamble,” Prasad said. “The five selectors earlier and three now had seen him do exceptionally well in the domestic circuit. Someone who can get a 260 and a 180 in Ranji Trophy shows the ability and the hunger he has.

“Kedar Jadhav is a little dynamite. I saw him play a Ranji game at Lahli, Andhra versus Maharashtra (2014-15 quarter-final). It was a seaming track and they were some for 40 for 6 and this guy scored some 80-odd and won the game for Maharashtra.

“Somehow like Virat enjoys chasing, this guy enjoys finisher’s role. During one of the recent India A tour to Australia he played that role. Even in Zimbabwe he did well and I’m happy for him.”

The major concern for India ahead of the Champions Trophy appears to be their openers. Shikhar Dhawan, KL Rahul and Ajinkya Rahane do not have the weight of runs behind them, but Prasad chose to play that down.

“As far as the opening slots are concerned, we all know that Rohit Sharma is injured and it’s just a matter of time before he comes back,” he said. “I know it would have helped the rest to get some runs under the belt but I am not overtly worried because we have domestic limited-overs cricket and then the big event like IPL coming all the boys will have minimum 15-16 matches before they head to the Champions Trophy.”