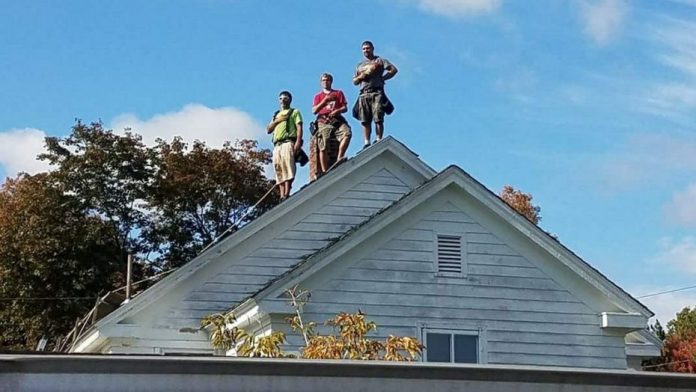 Three Maine roofers stand for the playing of the national anthem.

Three Maine roofers put their hammers down and stood up to show respect for the national anthem on Saturday, in the process unknowingly posing for a photo that’s been used to symbolize one side of the contentious nationwide debate about “The Star-Spangled Banner.”

The roofers, who were working near Waterville High School’s football field, stood for the national anthem “even though they didn’t have to,” Michelle Lyons Cossar, the Old Town resident who snapped the photo, told Fox News on Monday.

While Cossar was standing for the anthem prior to the start of Saturday’s game, she said she heard someone in the stands point out the workers had also risen.

“When I looked over the fence, I saw them standing and respecting the flag,” she said.

That’s when she decided to take a picture.

“I just thought the world could use a little more of that right now,” she added.

Cossar’s photo has been shared nearly 600 times as of Monday afternoon.

The three men in the photo are Dwayne Harrison, Danny Thyng and James Scruggs, according to Cossar. The trio didn’t immediately respond to a request for comment.

Shanon Gurski Dixon, a resident of Waterville, shared the Cossar’s picture to her Facebook page. She told Fox News she hopes to one day find and thank the men for “being such good role models to our youth.”