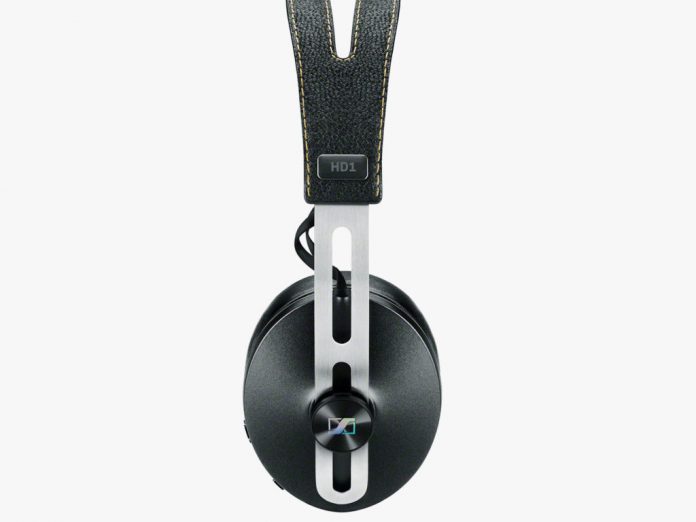 I have a love-hate relationship with wireless headphones. The idea is incredibly appealing, but the added complication of charging multiplied by the notoriously finicky Bluetooth tech still has me clinging to my rats’ nest of cords like a fogie who won’t give up his horse-drawn carriage.

So, when the Sennheiser HD1 wireless over-ear headphones landed on my desk, I was hopeful. It’d been a while since I had given a pair of wireless cans a chance, so I reset my expectations and wound up pleasantly surprised.

These headphones are a tweaked version of Sennheiser’s previous Momentum Wireless model. They’re built from premium materials and feature a retro design that’s comfortable as heck. My sensitive noggin appreciated the mindblowingly-soft leather on the ear cups as soon as I donned them—if I had a lounge chair made of this leather, I’d crawl into it and never get up for the rest of my life.

For traveling, the HD1s fold up neatly. Sennheiser includes a neoprene zip case as well as a drawstring pouch, so it’s easy to protect your headphones, no extra purchases necessary. Also included in the box is a micro USB cable for charging, and a stereo jack for wired use. Listening on and off for a few days made me confident in Sennheiser’s 20-hour battery life estimate—I was able to get three days’ worth of mixed play on a charge.

Easy to carry with a fold-up design. Light and comfortable to wear. Uber-soft leather earcups. Solid battery life of around three days. Cables in the box for when you want to go corded.

Expensive. Noise cancellation is imperfect and always on. Controls are fiddly and take getting used to.

Perhaps the most frustrating aspect of the HD1s is the single button used for pairing and power. Every time I tried to turn these headphones on and held the button down for a moment too long, the headphones put themselves into pairing mode. When it happened, this added around thirty seconds to the power-on process, just long enough to aggravate me. Don’t get between a man and his podcasts, Sennheiser.

Said power button is also rather flat, and even though it’s flanked by raised dimples, often difficult to precisely find by touch. The multipurpose slider switch worked a bit more reliably. This slider depresses to let you play/pause music, answer phone calls, and slides back and forth for other functions like volume.

For listening to podcasts, these headphones are more than capable. When it came to streaming more complex music, like an orchestral movie soundtrack, I was impressed. The HD1s sound crisp on the high end, and have just enough bass to lend a nice punch without overdoing it. Subtle details in the orchestra didn’t get too badly muddled, much to my surprise. The HD1s should sound even better when used with devices that support AptX, which can stream your music at higher bit rates than normal Bluetooth.

Even though they sound and look great, the noise cancellation was kind of a bummer. There’s no way to disable it, and I found it seemed to get faked out by environmental noise on my commute, reinterpreting the train’s cacophonous sounds into strange blips. I can see the appeal of active noise cancellation when on an airplane, but most other times I just want my over-ears to have decent enough isolation without active cancellation.

Then there’s the price. $500 is a lot to pay for headphones, especially if you’re used to earbuds you can find at the bottom of a Cracker Jack box. Having used the HD1s and the competing, cheaper Bose QuietComfort 35 over-ears, I think the Bose headphones are actually the better choice for most folks.

The problem with the QC35s, despite their superior noise cancellation and lower price, is that they aren’t as attractive or as nicely built as the HD1s Forget the luxurious leather that Sennheiser supplies—Bose coats everything in cheaper vinyl instead. Think that Bose headphones are too plebian? Give these an audition. They’re comfy, sound great, and if you can afford them I think they’re worth a shot.

When you buy something using the retail links in our product reviews, we earn a small affiliate commission. Read more about how this works.