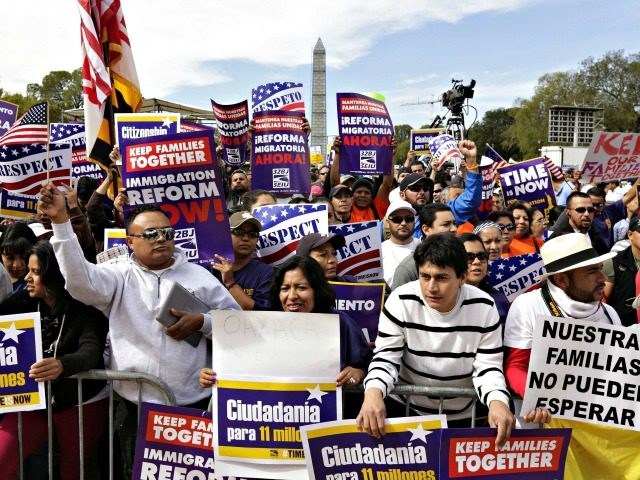 Rep. Dave Brat (R-VA) said the amnesty plan Sens. Dick Durbin (D-Ill), Lindsey Graham (R-SC), and Jeff Flake (R-AZ) are pushing in the Senate is not designed to legalize just the hundreds of thousands of illegal aliens enrolled in the Deferred Action for Childhood Arrivals (DACA) program, but will give amnesty to additional millions of illegal aliens.

“The current bill proposed by Senators Dick Durbin and Lindsey Graham is intentionally misleading,” Brat told Breitbart News.“It does not just include legal status for 700,000 DACA individuals, but also grants a path to citizenship for 3.2 million Dreamers and legal status for their parents as well.”

“In total, this proposed bill could effectively provide amnesty for as many as ten million individuals,” Brat said.

The bill, which was pronounced dead for all intents and purposes by Durbin on the Senate floor, is also sponsored by Flake but is generally credited to Graham and Durbin.

Brat told Breitbart News that lawmakers should be working on ways to help Americans.

“Speaker Paul Ryan and my colleagues in the House are already looking to find ways to bring 20 million American workers back into the labor force who were previously displaced by the financial crisis and cheap labor in the past, and so I do not think the American people are going to go for that kind of a deal,” Brat said.

Meanwhile, despite President Donald Trump’s remarks to reporters on Wednesday about citizenship at some point in the future for Deferred Action for Childhood Arrivals (DACA), White House officials are slamming the Flake-Graham-Durbin amnesty legislation.

White House deputy press secretary Hogan Gidley said on Monday the lawmakers “were completely dishonest” in their negotiation with the president, including insufficient funds for the construction of a wall on the U.S. southern border with Mexico.

“Senator Graham and Senator Durbin called the president and told him they had a bipartisan bill,” Gidley said on CNN’s “The Lead With Jake Tapper.” “They’d come together with some meeting of the minds to prepare a piece of legislation that would address everything the president outlined. The president was ecstatic.”

But he added: “Here’s the problem: Senator Graham and Senator Durbin were completely dishonest.”

Gidley also criticized Graham for painting himself as being in lockstep with the White House on immigration, extending a contentious streak of exchanges between the South Carolina lawmaker and the president.

“To pretend he is anything other than someone who wants open borders and amnesty is just disingenuous,” Gidley said.

White House deputy press secretary Raj Shah said on Monday the president wants to help DACA recipients but not through this legislation, according to Politico.

“The Graham-Durbin proposal is not a proposal the president can sign,” Shah said.

The Hill reported on Thursday that 30 Senators, mostly Democrats, are working on another immigration bill, which would have to be vetted by Durbin and Sen. John Cornyn (R-TX), ranking Democrat and chairman, respectively, of the Senate Judiciary immigration subcommittee, before it goes to the Senate floor.