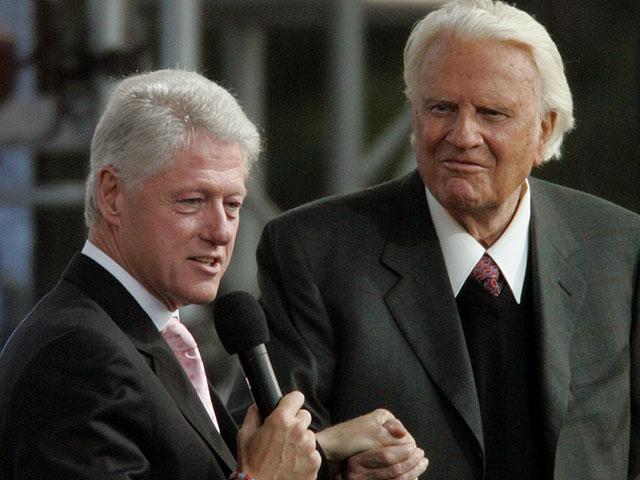 Evangelist Franklin Graham greeted the 42nd president at the entrance of the library and walked to the home where Billy Graham grew up.

Graham and Clinton spent time reminiscing about “America’s Pastor” before the former president shared a word about the impact he had on his life.

“I’m just one of hundreds of millions of people who will find their own way to say thank you and goodbye to Billy Graham,” Clinton said during a press conference.

At the age of 11, Clinton attended a Billy Graham crusade with his Sunday school class at the War Memorial Stadium in Arkansas.

It was a crusade that almost did not happen because of the newly implemented integration laws.

“The town, the state were in turmoil. People were so resistant they closed the schools,” Clinton explained.

Graham was scheduled to hold a crusade in the state but the White Citizen’s Counsel demanded he preach to a segregated crowd.

“He said,  ‘God didn’t see us that way. And if that were going to be the rules he would have to cancel the crusade and tell people why he did it’,” Clinton said of Graham. “They folded quick.”

Clinton shared that the stadium was packed with Blacks and Whites because of the stand Graham took against racism.

He would have the opportunity to meet the evangelist 30 years later.

“I was the governor and he had had a long relationship with the man who was the pastor of my church who didn’t have long to live. He wanted to go visit him, so I took him to go visit him.”

Clinton said that in that private moment he learned volumes about the heart and integrity of Graham.

“Not before a vast crowd, but in a tiny living room of a Baptist preacher with a very modest income, I listen to him talk to an old friend about faith, and life, and death,” he said. “It was also one of the most memorable experiences of my life.”

Clinton became one of a long line of presidents that Graham advised.

According to the Charlotte Observer, Graham visited the White House during Clinton’s two terms, sent encouraging letters to the Clintons, and acted as an emissary during tense times with North Korea.

Graham also counseled then-First Lady Hillary during the accusations of a sex scandal between Bill and intern Monica Lewinsky.

“Don’t forget that those of us who are Christians believe in a God of second chances and the politicians need those more than anybody else,” Clinton said Tuesday. “You got to cut them a little slack for trying to give a willing ear and an open heart without regard to his political preference.”

“Hillary and I were glad to have in the White House a couple of times, but mostly I was glad to see that in that little room he was the same person I saw when I was 11 in that great big football field,” he continued. “I think that says a lot.”

He said that he would always remember Graham for the Gospel message he shared and his ability to walk by faith and trust God.

“I think he was a profoundly good man who conveyed simple beliefs. That we can claim kinship with God by asking,” he shared, “He showed his faith by his works and by his life.”

“For me, every time I think about him, I’ll be 11 again. Having no idea how my life would turn out. Grateful. That in that one moment when it would have been easier not do it, he actually lived his faith.