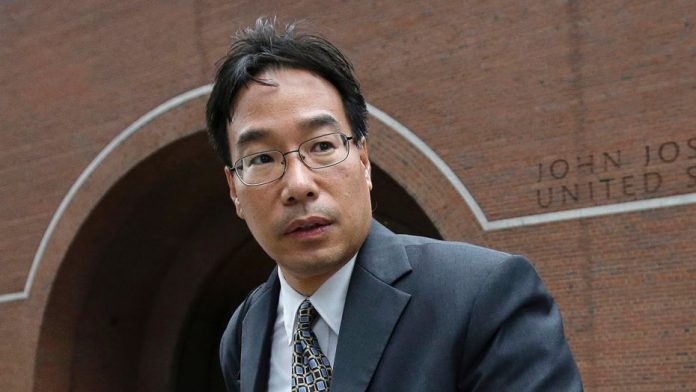 A Massachusetts pharmacist convicted in connection with a deadly 2012 meningitis outbreak fought through sobs as he apologized to victims and their families Wednesday before being sentenced to eight years in prison for his role in what’s considered the worst public health crisis in recent U.S. history.

Glenn Chin, who ran the so-called clean rooms where the drugs were made, sobbed as he struggled through his statement during his sentencing hearing in Boston’s federal courthouse. Chin said he knows some victims will never forgive him, but will continue to pray that they will find some sort of peace.

“I realize these are just words and nothing will bring back your loved ones,” the 49-year-old said, occasionally turning to look directly at the victims and their relatives seated behind him. “But believe me when I say that I am truly sorry that this ever occurred,” he said.

Prosecutors wanted a 35-year-sentence for Chin, pointing to the devastating impact the outbreak had on families across the country. Chin’s lawyers asked for about three years behind bars.

“That’s the sound that she has in her head when she thinks about her mother’s death,” Strachan said. “It’s the sound made by Glenn Chin’s conduct.”

Mary Beth Krakowski of South Bend, Indiana, whose aunt died at age 88 after being injected with the contaminated drugs, told Chin he had a chance to be a “hero” and blow the whistle on the pharmacy’s dangerous practices.

“How did you get lost? How did you lose those ideals? How could you have fallen so far to become uncaring, cold and callous enough to put the patients’ welfare behind your personal gain?” asked Krakowski, the niece of Alice Machowiak.

Chin was convicted in October of racketeering and mail fraud but was cleared of second-degree murder, which could have brought a life sentence. He had had been charged with the deaths of 25 people in Florida, Indiana, Maryland, Michigan, North Carolina, Tennessee and Virginia.

Throughout his trial, prosecutors portrayed him as a callous employee who cut corners and ignored warning signs that the pharmacy’s production methods were unsafe in order to boost production and profits.

Chin’s attorneys argued that he didn’t deserve more time behind bars than the pharmacy’s co-founder, Barry Cadden, who’s serving a nine-year sentence for his role in the outbreak. Cadden also was acquitted of second-degree murder.

Chin’s attorneys said Cadden was the one calling the shots and that Chin just couldn’t stand up to his boss. They said there was no evidence Chin caused the drugs to become contaminated.

“There is more to Glenn Chin than NECC,” attorney Stephen Weymouth told the judge, pointing to the dozens of letters written by friends and family that described him as a mentor and loving father to his two young children.

“This will be Glenn Chin’s own prison from which he will never be able to get out of for as long as he lives,” Weymouth said.

After the sentencing, victims expressed their dismay at what they considered to be a light sentence and the fact that neither Chin nor Cadden were convicted of murder.

“I want somebody in there blamed for the deaths,” said Willard Mazure, Jr., of Michigan, who became sickened after receiving an injection in 2012. “We’ve got 80 people dead, and nobody is responsible.”

The judge ordered Chin to report to prison in March.