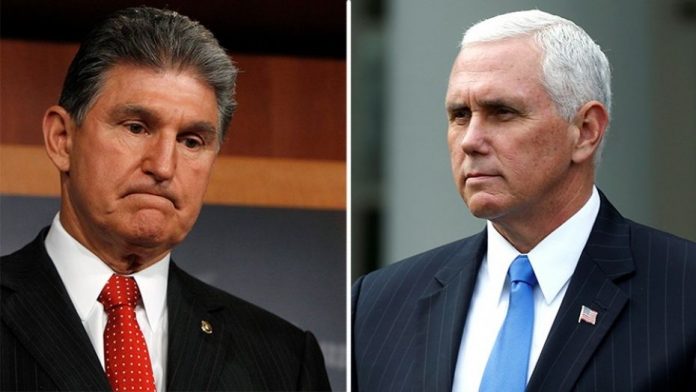 Vice President Mike Pence extolled the benefits of recently enacted tax cuts in West Virginia Tuesday, while simultaneously taking rhetorical shots at Democratic Sen. Joe Manchin in a likely preview of what could be a crucial Senate race for both parties.

“When it came to cutting your taxes, Joe voted no,” Pence told employees at a White Sulphur Springs manufacturing company, adding that Manchin “has voted no time and again on the policies that West Virginia needs.”

Pence attacked Manchin for voting against repealing and replacing ObamaCare, defunding Planned Parenthood and promising to vote against an immigration package that includes funding for President Trump’s promised wall along the U.S.-Mexico border. Manchin has bucked his party to vote with the GOP in the past, and even said fellow Democrats who refused to stand during Trump’s State of the Union address Tuesday were acting “disrespectful.”

Manchin, a popular former governor and the lone Democrat in West Virginia’s congressional delegation, is seeking re-election to a second full Senate term this November. Trump won West Virginia by 42 percentage points in November 2016, leading some to speculate that a GOP candidate could ride Trump’s coattails to pick up the seat for Republicans.

Pence’s appearance was one of a series of events publicizing the new tax law and promoting its benefits to workers and employers. Trump was scheduled to visit West Virginia Thursday to promote the tax cuts on his way to address a congressional Republicans’ retreat.

“In just the past month, businesses large and small have already committed to invest an extra $425 billion into American enterprises to expand, innovate, to create jobs, to raise wages for their workers,” Pence said. “And before this year is out, we believe the typical American worker will see their take-home pay rise by as much as $4,000 a year. That’s real results for the American people.”

Pence also spoke briefly about the Virginia crash of the Amtrak train carrying GOP lawmakers to a West Virginia retreat earlier Wednesday. One person outside the train was killed in the wreck. The vice president said Americans were grateful for the lawmakers’ service, adding, “We thank God it wasn’t worse.”