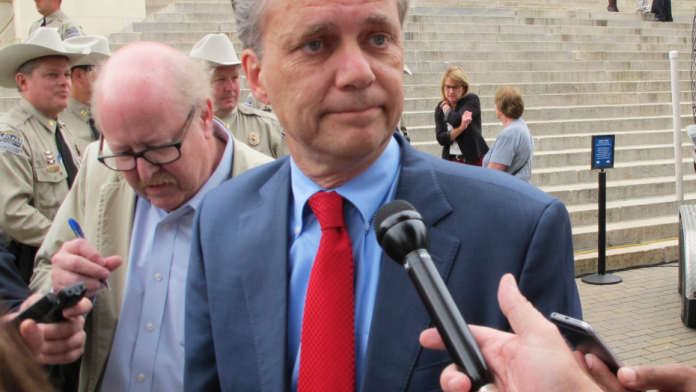 TOPEKA, Kan. –  Republican Jeff Colyer prepared to take over as Kansas’ next governor Wednesday facing a skeptical GOP-controlled Legislature that is deeply divided over a court order to increase state spending on public schools.

Ahead of Colyer’s swearing-in, a top Republican lawmaker urged him to push for a long-term settlement of ongoing legal battles over education funding that led to the Kansas Supreme Court’s mandate. Senate Majority Leader Jim Denning, who is influential among GOP conservatives, said Colyer should either support rewriting the state constitution or initiate settlement talks with four school districts suing the state.

“That’s the No. 1 priority,” said Denning, a Kansas City-area Republican. “We have to settle it this year.”

Colyer, the state’s longest-serving lieutenant governor, is scheduled to be sworn in Wednesday afternoon. He is replacing GOP Gov. Sam Brownback, who is stepping down to become U.S. ambassador-at-large for international religious freedom.

But Colyer, 57, said before the event that his inaugural speech will focus on broad themes about “what is special about Kansas,” rather than policy.

The biggest task Colyer and legislators face is how to respond to the court’s ruling that funding for public schools remains constitutionally inadequate, despite an increase approved last year. The decision came in a lawsuit filed by the four districts in 2010, but the state has been in and out of education funding lawsuits for decades.

Denning and other conservative Republicans favor rewriting the state constitution to curb the court’s power over school funding issues, but they have been unable to muster the two-thirds majorities in both chambers that they’d need to get a measure on the ballot. The state also has had unsuccessful settlement talks with the aggrieved school districts.

Brownback proposed phasing in an additional $513 million increase over five years, relying only on the annual growth in state revenues to pay for it. The plan angered many Republicans, who viewed it as fiscally reckless and undercutting a push for a constitutional amendment.

Colyer promised a more open and approachable administration after Brownback was nominated by President Donald Trump last summer for the ambassador post. But lawmakers are waiting to see whether he breaks with Brownback’s policies or modifies the school funding plan.

He remained a loyal No. 2 during seven years as Brownback’s lieutenant governor, even as Kansas voters turned on Brownback because of the persistent budget problems that followed aggressive income tax cuts the governor championed in 2012 and 2013. Lawmakers last year rolled back most of the cuts.

Colyer is a Kansas City-area plastic surgeon who does both cosmetic and reconstructive procedures. He’s been associated with the International Medical Corps for three decades and has continued during regular medical relief missions as lieutenant governor.

Colyer made three $500,000 loans to Brownback’s and his re-election campaign in 2013 and 2014 that were highly unusual for their size and timing, with two paid back within days and the third over 16 months. Federal prosecutors ended a grand jury investigation in 2015 without plans for criminal charges.