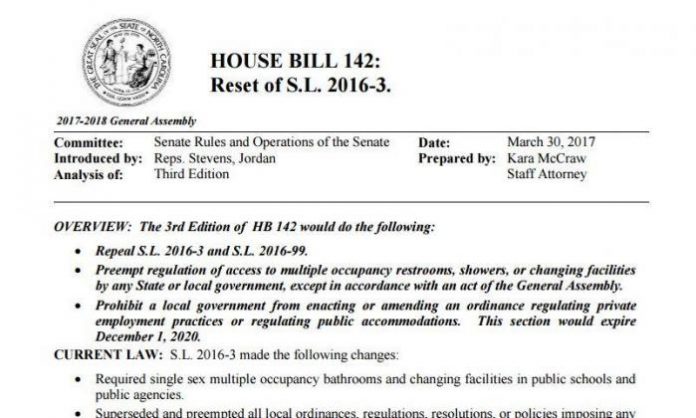 March 30 (UPI) — Both houses of the North Carolina General Assembly on Thursday voted to repeal House Bill 2 — the controversial measure addressing transgender public restroom use — as part of a compromise package between progressive and conservative lawmakers.

Under the deal, House Bill 142, the embattled legislation will go away in exchange for the loosening of state anti-discrimination ordinances that led Republicans to craft the bill in the first place.

There are three main parts of Thursday’s compromise — repealing HB2, giving the state authority over regulation of multiple occupancy restrooms, showers or changing facilities to the state, and imposing a moratorium on local municipalities passing related ordinances until Dec. 1, 2020.

HB2 legally required all transgender students and state employees in North Carolina to use public restrooms for their birth sex. Opponents viewed the measure as discriminatory and it led to wide-scale condemnation and severe economic ramifications for the state — including the NBA moving this year’s all-star game from Charlotte and the National Collegiate Athletics Association stripping hosting duties from the city of Greensboro for this year’s men’s basketball tournament.

Since its passage in March 2016, the law drew substantial criticism — as well as a lawsuit from the U.S. Department of Justice — and has come close to repeal on a few occasions. It was expected to be written off the books in December, under the guidance of new Democratic Gov. Roy Cooper, but that repeal effort failed at the last minute. 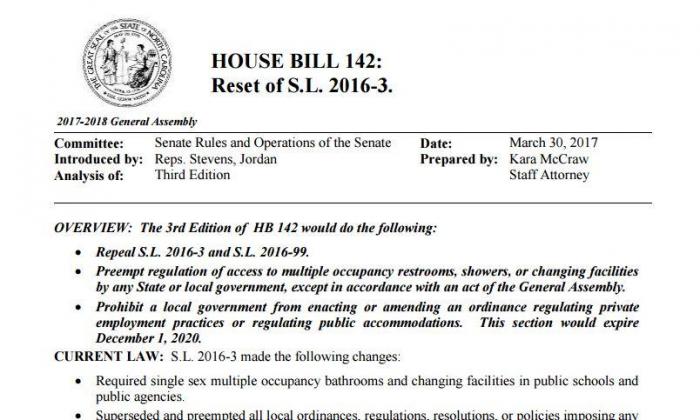 The measure was sent on to Cooper for his signature. It wasn’t completely certain, though, whether he will sign it — but he said Wednesday night that he supported the compromise.