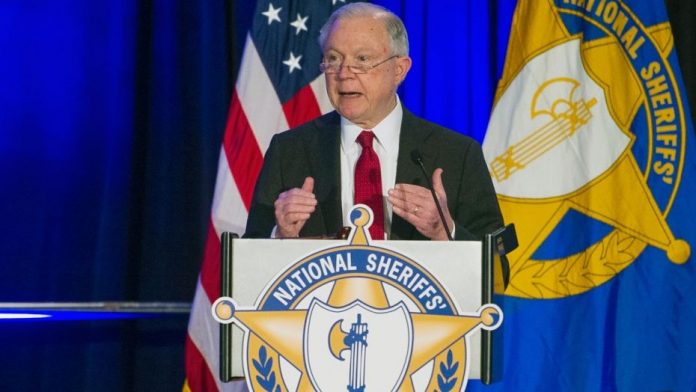 The Justice Department pushed back strongly Monday after critics, including some in the media, claimed Attorney General Jeff Sessions used racist language when he addressed a group of sheriffs.

Sessions told the National Sheriffs Association, “The office of sheriff is a critical part of the Anglo-American heritage of law enforcement.”

The “Anglo-American heritage” part of Sessions’ comment caught the eye of writers at a number of media outlets. Newsweek headlined a story with “Jeff Sessions faces fresh racism charge after praising ‘Anglo-American Heritage’ of law enforcement.”

There was even more outrage on social media. Time magazine national correspondent Charlotte Alter tweeted that Sessions’ statement was proof that “our justice system is rooted in white supremacy.”

Sen. Brian Schatz, D-Hawaii, tweeted that the remarks were “a dog whistle” and “appalling,” while actress Alyssa Milano said that Sessions should be “fired immediately.”

DOJ officials were quick to point out that Sessions was referring to the precedent-based English common law system that forms the basis of the American legal code.

“As most law students learn in the first week of their first year, Anglo-American law – also known as the common law – is a shared legal heritage between England and America,” spokesman Ian Prior said in a statement. “The sheriff is unique to that shared legal heritage. Before reporters sloppily imply nefarious meaning behind the term, we would suggest that they read any number of the Supreme Court opinions that use the term. Or they could simply put ‘Anglo-American law’ into Google.”