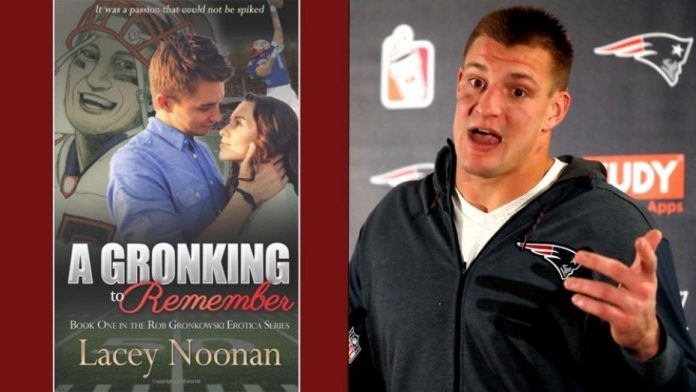 To football fans, he is the “Gronk.” To a couple unwittingly enmeshed in a less-than-literary work of fiction, it was an invasion of their privacy. To a panel of judges, it was case dismissed.

The digitally published “A Gronking to Remember” – distributed by Kindle, Smashwords, CreateSpace and NOOK Press – was billed as the first installment in the “Rob Gronkowski erotica series.”

For the cover art, author Greg McKenna downloaded a photograph he found on the Internet of an Ohio couple taken at their engagement and put it online without their permission or compensation. The couple – named in court papers and Jane and John Roe – sued, saying the work was “less than tasteful and is offensive.”

Among the more tepid lines in the book: “I’ll never forget the first time I saw Gronk spike a football … The unrivaled power of his touchdown dance: ‘The Gronk.’ It jettisoned jiggling ribbons of electric jelly through my body.”

But the cover was not necessarily illegal. The 6th Circuit U.S. Court of Appeals found the companies had no input in the creation or design of the book’s cover page. Amazon and Barnes & Noble were among the companies providing the online publishing services.

The court found the Roes failed to prove the companies were liable over any photo rights issues.

As the court explained, the 2014 work by McKenna — using the pseudonym Lacey Noonan — deals with “the make-believe exploits of a married woman who becomes fascinated with New England Patriots football player Rob Gronkowski.”

“We conclude that the plaintiffs have not offered any facts to support a finding of liability on the part of the Corporate Defendants,” said the judges. “The Roes do not argue, and there is no summary judgment evidence in the record to suggest, that there was any commercial value in associating their likeness with the Corporate Defendants.”

The Roes’ lawsuit against the self-published author still continues.