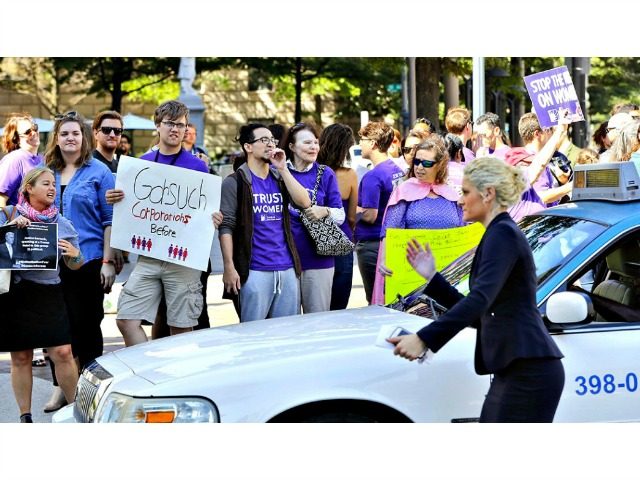 Supreme Court Justice Neil Gorsuch spoke about the importance of the First Amendment and free speech at a luncheon hosted by The Fund for American Studies at the Trump International Hotel in D.C. on Thursday while a handful of protesters took shots at him and President Donald Trump outside the venue.

“Those with whom we disagree vehemently still have the best interests of the country at heart,” Gorsuch, who did not mention the protest or Trump, said. ”We have to learn not only to tolerate different points of view but to cherish the din of democracy … It’s not just about good manners and courtesy. It’s about keeping our republic.”

“To be worthy of our First Amendment freedoms we have to all adopt certain civil habits that enable others to enjoy them as well,” Gorsuch said at the event, which marked the 50th anniversary of TFAS.

Protesters held signs that said, “Who is Gorsuch?,” Politico reported. Some wore purple T-shirts emblazoned with the words “Trust Women.”

Organizers said they did not understand the controversy, because they had booked the hotel before Donald Trump was elected president and Gorsuch was nominated to the Supreme Court and were not trying to send any kind of political message.

“We had no political agenda — it’s just a nice hotel and a new venue for us,” Steve Slattery, a spokesman for TFAS told CNN.

“Though Gorsuch stipulated that the speech not be used to solicit donations, and he was not paid for his appearance, profits from the event will go to the Trump hotel and even to Trump himself,” Business Insider reported. “The president has moved his assets to a trust in his name, meaning he can still profit from his businesses, albeit after he leaves office.”

The liberal Constitutional Accountability Center is representing more than 200 members of Congress in a lawsuit against Trump over the Foreign Emoluments Clause, the constitutional provision that prohibits government officials from receiving payments from foreign governments.

But Carrie Severino of the conservative Judicial Crisis Network called the connection between Gorsuch’s appearance, the venue, and the lawsuit “absurd.”

“This controversy is absurd, the idea that appearing at an event at this hotel would impact the emoluments lawsuit is already a stretch and the proposition that he is endorsing the hotel or the president on a broader level is even more ridiculous,” Severino said.

Justices have often appeared before ideologically aligned groups, including conservative justices Samuel Alito and the late Antonin Scalia, who both spoke to the conservative Federalist Society, and liberals like Ruth Bader Ginsburg and Stephen Breyer have appeared before the progressive American Constitution Society, according to Ken Klukowski, senior legal editor at Breitbart News.