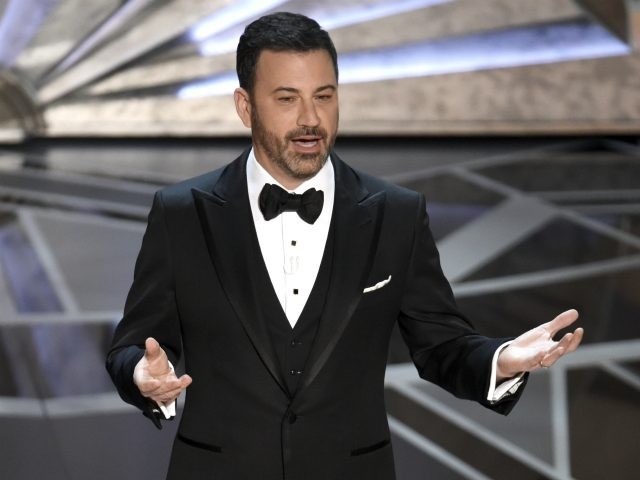 “This year, when you hear your name called, don’t get up right away. Give us a minute. We don’t want another thing,” Kimmel began, alluding to last year’s Best Picture fiasco.

“Oscar is the most beloved, respected man in Hollywood,” Kimmel said, making the first #MeToo moment joke and looking to a giant golden Oscar statuette on the stage. “Keeps his hands where you can see them. Never says a rude word, and most importantly, no penis at all. He’s literally a statute of limitations. And that’s the kind of men we need more of in this town.”

“Here’s how clueless Hollywood is: we made a movie called What Women Want, and it stars Mel Gibson,” the Live host quipped to few laughs.

“What’s happening is long overdue,” Kimmel continued. “We can’t let bad behavior slide anymore. We need to set an example… if we can do that, women will only have to deal with sexual harassment every other place they go.”

“The success of Black Panther is one of many positive success stories this year, for. black people and for Bob Iger,” he said of the mega-blockbuster Marvel Studios hit.

“If you’re a nominee tonight who isn’t making history, shame on you.”

“None other than President Trump called Get Out the best first three-quarters of a movie he’s seen this year.”

“Timothee is missing Paw Patrol to be here tonight.”

“We don’t make films like Call Me By Your Name to make money. We make them to upset Mike Pence.”

“Thanks to Guillermo, we’ll always remember this year as the year men screwed up so badly, women started dating fish.”

Kimmel also encouraged viewers and audience members at the Dolby Theater to join “the amazing students at Parkland” organizing the “March for Our Lives” gun control march scheduled for March 24.

Be sure to stay tuned for the Breitbart News Oscars livewire, for all the latest news and developments.