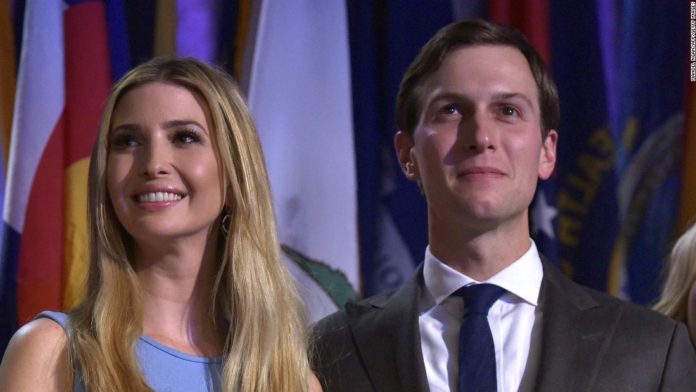 Share on Facebook
Tweet on Twitter
Ivanka Trump said on “60 Minutes” she would “be a daughter” when her father becomes president, but her actions have often suggested otherwise. She stumped for her father during his election campaign and worked extensively on his behalf on causes such as child care and climate change.
In August, Ivanka even got her father to unveil his policy proposals to lower child care costs, a policy that she partly crafted and included as a part of her father’s political platform. She declared child care as a “top concern” of hers and pointed out how her father is “in a very unique position to do something about this problem.”
“Little focus has been put on how best to alleviate enormous financial burdens child care places on low-income-and middle-income families,” Ivanka Trump said, flawlessly following up on the theme of empowering working mothers, whom she introduced at the Republican National Convention. As recently as last month, Ivanka was personally calling members of Congress about child care legislation and tax deductions.

So it is confusing, to say the least, to hear her now say that she will not be working in her father’s administration.

However, the truth is it really does not matter if Ivanka takes on an official role within the Trump White House or not.

The New York Times has already crowned her the most influential first daughter since Alice Roosevelt Longworth. And with Kushner being called the “president in-law,” the two are set to become the most powerful couple in Washington.
Jared Kushner, whom many credit with having won the presidency for Donald Trump, is also expected to be his father in-law’s point policy person on the Middle East, with Trump even stating he believes Kushner could broker peace between the Israelis and Palestinians.

This almost delusional faith in his family members, particularly his children, and reliance on them in business and now politics, has become a trademark of Trump’s. His children make up his closest circle, and they are the only ones who appear to be able to provide him with any kind of check and balance.

This makes Ivanka and Jared perfectly positioned to influence the incoming President in ways even his closest advisers Kellyanne Conway, Steve Bannon or Reince Priebus could never manage.
“They’re ideal politicians,” journalist Peter Davis says. “Because you come away from any interaction thinking they’re great and nice and don’t have any deeper feeling about them.”

In other words, they are much more likable than Donald Trump. That’s not hard to see, and it makes the couple a critical asset to the entire Trump family and brand.

And with Melania and Donald Trump adamant on spending as little time in Washington as possible, Ivanka and Jared will effectively be the de facto first couple of the United States, wielding more power together than any first daughter and son-in-law in presidential history.

As Vanity Fair explains: “The Bush daughters got more attention for their college-age shenanigans than anything else while their father was in office. Chelsea Clinton and the Obama girls were too young to play any role other than First Daughter while they occupied the White House. But the Trumps, fiercely insular, and the Trump-Kushners, intensely striving, are different. And they are about to occupy an unprecedented place in American history.”

While presidents giving jobs to their kids is nothing new — George W. Bush worked on his dad’s campaign in 1988 and even helped staff the White House — Washington has never had a president like Trump, and so has never seen the kind of formalized and powerful roles Jared Kushner and Ivanka Trump are set to enter.

Even if Kushner’s appointment as senior adviser ends up getting blocked and Ivanka gets no formal title, these two will never be far from the President’s ear. And that’s a huge advantage for Trump. Ivanka and Jared almost make you forget that one of the most unpopular presidential candidates in recent US history is about to become President.

Even an avid Hillary Clinton supporter such as myself can see how the couple give Trump’s White House a much more appealing image than Donald Trump could ever construct, providing a dangerous distraction from the fact they will have unlimited opportunity to advance their own political and business agendas.

So are the Trumps paving the way for a new brand of American political dynasties that defy ethics and conflicts of interests? That remains to be seen. But one thing is crystal clear: When it comes to Donald Trump’s America, Ivanka and Jared will be ruling it.