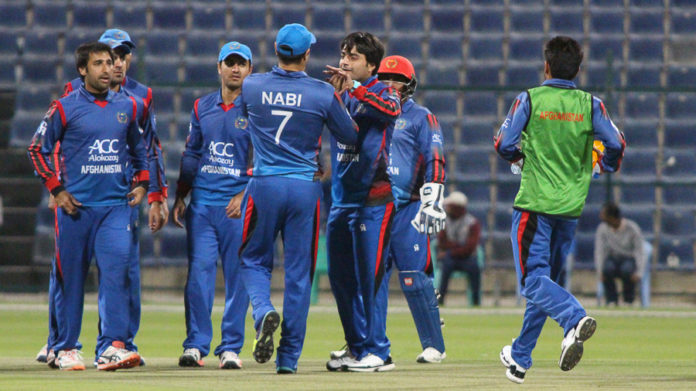 Ireland’s woes in the T20 format continued as they were no match for the top-ranked Associate side, meandering to a total of 125 for 6 before Afghanistan coasted to victory with eight balls to spare.

After electing to bat, Ireland got off to a promising start thanks to a typically belligerent Paul Stirling and a travel-weary Stuart Poynter, who arrived at 2am as an injury replacement after Stuart Thompson had a mishap at training on Friday afternoon. As was the case in the early match at Sheikh Zayed Stadium, the wind blowing southeast acted as a temptress which sucked Stirling into giving away his wicket, failing to get enough lift into a heave towards the midwicket rope.

Once Stirling fell, Ireland’s middle-order struggled against the three-headed spin attack. The most potent threat among them was legspinner Rashid Khan, who had Kevin O’Brien playing down the wrong line before beating Gary Wilson’s attempted sweep for a pair of lbws. It left a long Ireland tail exposed with more than three overs to bat out and they barely managed to finish with a target of more than a run a ball.

Afghanistan cruised through their Powerplay behind Mohammad Shahzad and Najeeb Tarakai but Ireland’s own new legspinning hope Jacob Mulder caused some problems by beating Shahzad in flight after a charge down the pitch before claiming Asghar Stanikzai with a slider two overs later. Tarakai was run out off Mulder’s bowling as pressure built slightly. But Mohammad Nabi ensured the match was never in doubt.

The star allrounder made his impact felt with bat and ball in this contest to give Afghanistan a winning start to the tournament with a man-of-the-match display. With Ireland desperate to build confidence after entering this game, having lost 8 of their last 11 completed T20Is, Nabi broke the ominous opening stand with his second ball, teasing Poynter into playing across the line to a straight ball in the sixth over. He ended the 16th over by ending Greg Thompson’s laborious stay for 3 off 9 balls.

With the bat, Nabi entered after Mulder had spooked the top order back into the pavilion at 81 for 3 in the 12th. Afghanistan remained ahead of the run-rate for most of his innings but, just when the slightest bit of pressure built with the rate climbing back over a run a ball in the 17th during Mulder’s last over, Nabi provided a release with a deflating heave over midwicket into the southeast stand for six. He clobbered Boyd Rankin for good measure in the following over for another six over midwicket, before tapping the winning single in the 19th over.

Home away from home

Afghanistan supporters began filing into the stadium during the second innings of Scotland’s victory over Hong Kong, more than two and a half hours before the first ball had been bowled by Fareed Ahmad to Stirling. By that stage, there were about 1500 inside the ground and, when the first wicket fell, that number had swelled to 4000. By the end of the first innings, almost the entire pavilion stand on the south side was filled.

Though the atmosphere wasn’t quite as intense as the three finals played between these two sides at the World T20 Qualifiers in 2010, 2012 or 2013, it was still lively nonetheless. In the field, Rashid showed himself to be a fast-rising crowd favorite, getting arguably the loudest reaction when he first came on to bowl. But Nabi is especially beloved among the Afghan faithful and when he cranked sixes in back-to-back overs off Mulder and Rankin late in the chase, the south stand turned delirious.

After the teams exchanged handshakes, the Afghanistan players walked from the east to the west, waving back to the crowd to show their appreciation, setting off a volley of mobile-phone camera flashes. UAE may be the official host side, but there is no disputing who has the true home advantage in this event.