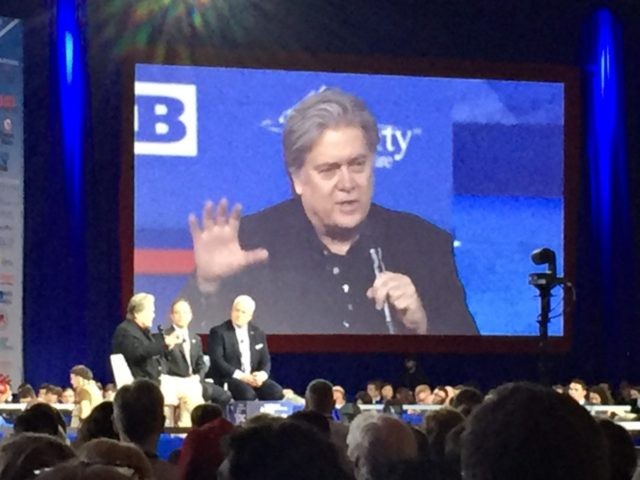 Bannon joked that he had graduated from the ranks of the “uninvited” — the title of an alternative conference that he led as the executive chairman of Breitbart News, which featured speakers who had been left off the CPAC agenda.

Asked by American Conservative Union chair Matt Schlapp to name the biggest misconception about the Trump White House, and their work together, Priebus replied: “Everything.”

Bannon agreed, repeating one of his most controversial lines of President Donald Trump’s administration thus far, greeting “the opposition” — the media — in the back of the room. He referred to them as such throughout his remarks, recalling how the “opposition party” had constantly disparaged the Trump campaign, to no avail.

“If you want to see the Trump agenda, it’s pretty simple,” he said. “It’s all in the speeches.” He added: “Our job, every day, is to execute on that.”

Bannon outlined the administration’s approach to implementing its agenda, including what he termed the historically significant withdrawal from the Trans-Pacific Partnership (TPP), which he said would be replaced by bilateral arrangements.

He said that Trump’s Cabinet appointees would lead the “deconstruction” of the “adminstrative state.”

Bannon, noting that he and Priebus could disagree and still work together, offered a different outlook on media bias: “It’s not only not going to get better, it’s going to get worse every day,” he said, adding that the “corporatist, globalist media” were opposed to change.

Conservatives, Bannon told the audience to applause, would have to remain active and involved. “If you think you’re going to get your country back without a fight, you are sadly mistaken.”

He asked the audience to have the administration’s back — but asked them: “Hold us accountable.”

Joel B. Pollak is Senior Editor-at-Large at Breitbart News. He was named one of the “most influential” people in news media in 2016. His new book, How Trump Won: The Inside Story of a Revolution, is available from Regnery. Follow him on Twitter at @joelpollak.