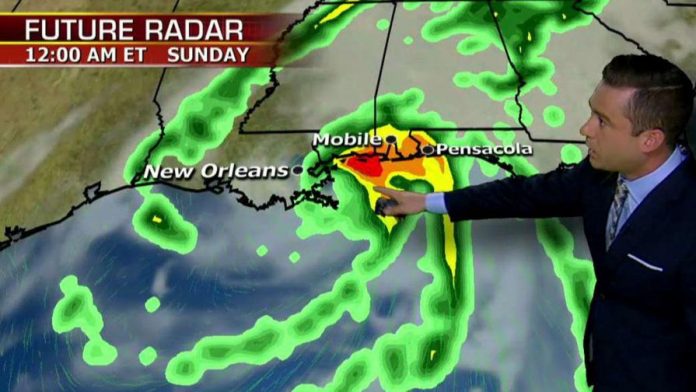 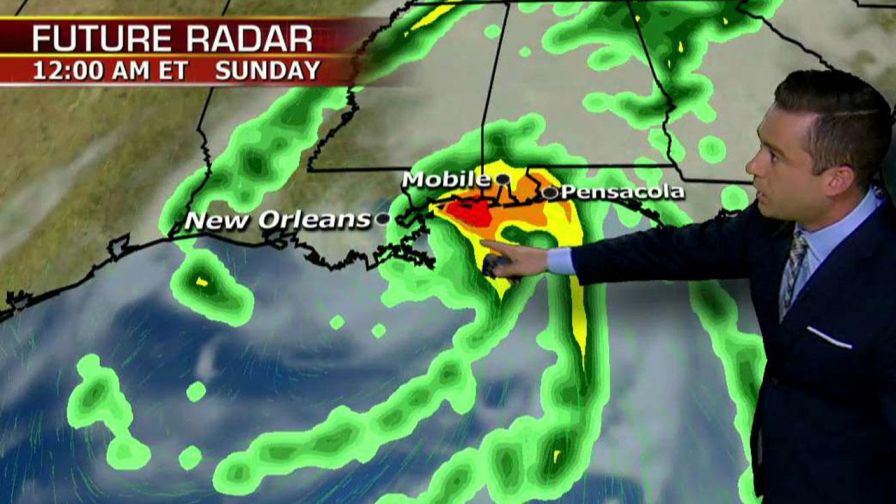 Hurricane Nate continues to strengthen as its churns toward the US Gulf Coast and was expected to be a Category 2 storm when it made at landfall Saturday evening.

The National Hurricane Center also announced new tropical storm warnings in effect for parts of the Florida Panhandle. The center reported rainbands from the storm were moving onshore in southeast Louisiana.

A tropical storm warning was now in effect east of the Okaloosa/Walton County Line to Indian Pass Florida, the center said.

A hurricane warning was in effect for Grand Isle, La., to the Alabma/Florida border as well as Metropolitan New Orleans and Lake Pontchartrain.

Louisiana’s governor urged his state’s residents to take Nate seriously, saying the storm “has the potential to do a lot of damage.”

“No one should take this storm lightly. It has already claimed the lives of at least 20 people,” Gov. John Bel Edwards said Friday. “We do want people to be very, very cautious and to not take this storm for granted.”

Mississippi, Alabama and parts of Florida also were expected to take hits from the hurricane – with states of emergency already declared in many counties.

The U.S. Coast Guard ordered all ports from New Orleans to Pensacola, Fla., to be shuttered Saturday before the storm hit the region due to the expected storm surges, Reuters reported.

Here’s what you need to know.

Where is Nate now?

Nate was in the center of the Gulf of Mexico, about 105 miles south-southeast of the mouth of the Mississippi River, according to the National Hurricane Center’s 1 p.m. ET Saturday advisory.

A hurricane hunter plane found the storm had gained new muscle in recent hours, with top sustained winds rising to 90 mph (135 kph) amid a threat of some additional strengthening. The center said Nate was accelerating to 25 mph and headed north-northwest on a course expected to take it onto the central Gulf Coast on Satruday night.

A hurricane warning was in effect from metropolitan New Orleans and Lake Pontchartrain, La., as well as Grand Isle, La., to the Alabama-Florida border. A tropical storm warning was in effect for Lake Maurepas and Morgan City to Grand Isle, La., as well as Okaloosa/Walton County, Fla., to the Alabama-Florida border.

What else do you need to know?

In Louisiana, Gov. Edwards already declared a state of emergency and mobilized 1,300 National Guard troops, with 15 headed to New Orleans to monitor the fragile pumping system there.

With forecasts projecting landfall in southeast Louisiana as a Category 1 hurricane, Edwards urged residents to ready for rain, storm surge and severe winds — and to be where they intend to hunker down by “dark on Saturday.”

The National Hurricane Center in Miami issued hurricane and storm surge warnings for southeast Louisiana and the Mississippi and Alabama coasts.

Edwards said forecasts for the fast-moving storm, which threatens to strike Louisiana as a hurricane this weekend, indicate the greatest risks are winds and storm surge, rather than intense amounts of rain.

That’s good news for New Orleans, where the city’s pumping system remains fragile but is working. Two flash floods this summer led to revelations about personnel and equipment problems at the agency that runs the system that drains the city.

New Orleans Mayor Mitch Landrieu said 109 of its 120 pumps are functioning, which is 92 percent capacity.

“We are ready for whatever Nate brings our way,” Landrieu said.

Nate is forecast to dump 3 to 6 inches of rain on the region — with isolated totals of up to 10 inches.

The storm was expected to strengthen as it moves over the Gulf and make landfall in the U.S. late Saturday or early Sunday. A tropical storm watch extended across Alabama and northeast Georgia, including the Atlanta metro area.

Edwards encouraged people across southeast Louisiana to hunker down for the storm by 8 p.m. Landrieu enacted a 7 p.m. Saturday curfew for city residents.

On Alabama’s Dauphin Island — a barrier island south of Mobile, Ala. — owners hauled boats out of the water ahead of the storm’s approach. The major concern was the storm surge was projected to coincide with high tide.

“The west end of the island floods in a good thunderstorm,” said Chad Palmer, owner of FinAtics Inshore Fishing Charters, which operates five charter boats on the barrier island.

Palmer said the storm, so far, did not seem to be causing much concern on the island that has been battered by monster storms such as Hurricane Ivan and Hurricane Katrina, but he was more cautious.

“Right now people are talking about hurricane parties. … This is my personal non-founded opinion, but this thing has got a whole lot of Gulf to cover before we say it’s going to be a little storm,” Palmer said.

Mississippi Gov. Phil Bryant declared a state of emergency in six southernmost counties. State officials, at a briefing Friday in Gulfport, warned that Nate’s main danger in that state will be from up to 10 feet of storm surge in low-lying coastal areas, as well as from winds that could damage mobile homes.

“If you are in an area that has flooded, I would recommend you evacuate that area until the storm has ended and the water has receded for your own personal safety and for the safety of the first responders that will be responding in the event you are trapped,” Bryant said.