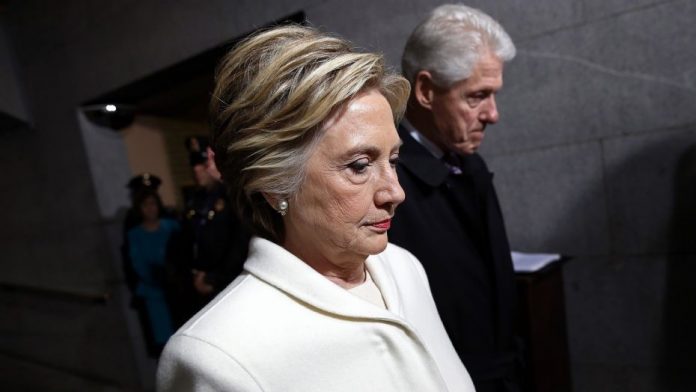 Hillary Clinton joked on Friday about how she and her husband, former President Bill Clinton, tried to ditch President Trump’s inauguration ceremony — and she even let out a curse word while describing how a different president described Trump’s speech.

“And it was reported that George W. Bush, as it ends, says, ‘That was some weird s—t,’” she said on BBC’s “Graham Norton Show” with a laugh, to which host Graham Norton replied, “And it was.”

Clinton said she had called more than one previous president to see if they were attending the inauguration.

“I really tried to get out of going,” Clinton recalled after Norton said her attendance was “Shakespearean.”

“We thought, maybe others aren’t going. So we called the Bushes, and the elder Bushes were in the hospital, which I think was legitimate,” Clinton said to a laughing crowd.

The former Democratic presidential candidate recalled not knowing what to expect before attending Trump’s inauguration, referring back to what she wrote in her book, “What Happened,” about that morning.

“What I wanted to have happen [at the inauguration] was despite the kind of campaign he ran, I wanted [Trump] to rise to the occasion of being our president and being the president for everybody, not just people who supported him,” she said.

But she was left disappointed, Clinton said. She said Trump’s inauguration speech was “dark and divisive” and was a “cry from the white nationalist’s gut.”

“I was so disappointed. Really, so sad that it wasn’t an outreach but it was a narrowing and a hammering of what he had said before,” Clinton said.

Clinton was a guest on the show as she continues to promote her book. She was seen with a surgical boot on stage after she broke her toe days earlier. She praised the care she received under England’s health care system. Clinton also revealed she “ignores” most of Trump’s tweets because “there are so many of them.” She admitted she responds when she feels like Trump’s tweets were “hurtful and unfair and really causing problems for people.”

She added, “The most dangerous thing he does is conduct diplomacy on Twitter,” such as trading insults with North Korean dictator Kim Jong Un.

“He does things that are not only upsetting, but kind of inexplicable.”