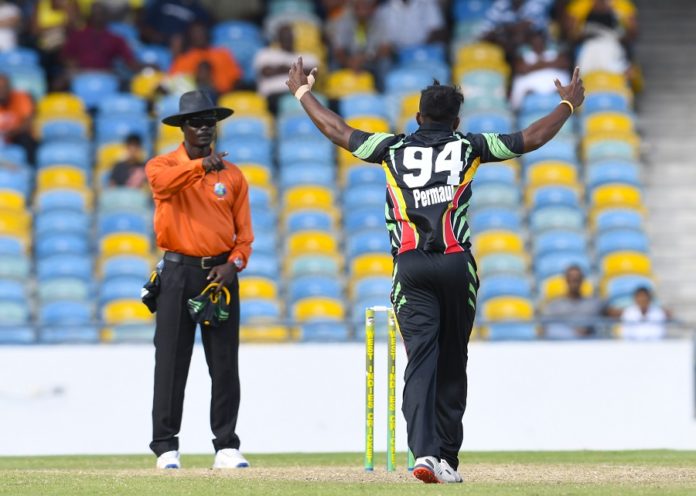 Guyana won their first game in three tries by knocking off the previously unbeaten Combined Campuses & Colleges by eight wickets at Kensington Oval on Saturday afternoon. CCC were bowled out for 129 after choosing to bat as left-arm spinner Veerasammy Permaul took 3 for 19 to decimate their middle order.

Opening batsman Amir Jangoo, who made half-centuries in both of CCC’s two wins to open up Group B, fell for a duck in the third over to Ronsford Beaton. With a top score of 28 and no partnership higher than 44, CCC struggled throughout their innings before being bowled out in 44.5 overs. Their best hope of defending a below-par total was capitalising on an early wicket. Chrstopher Powell dismissed Assad Fudadin for 8 in the third over but a second-wicket partnership of 117 between Rajendra Chandrika and Raymon Reifer revived Guyana and took them to within one shot of victory.

Reifer finished with a run-a-ball 67 and was named Man of the Match while Chandrika ended unbeaten on 43 off 76 to secure victory with 23.3 overs to spare.

Earlier in the day, Ashley Nurse took 4 for 26 and Sulieman Benn 3 for 19 to bowl ICC Americas out for 103 and lead Barbados to an eight-wicket win at the Three Ws Oval.

Having chosen to bat, and even doing well to reach 57 for 2, ICC Americas simply slumped against the threat of the two Barbados spinners. They lost eight wickets for 46 runs, a slide sparked by Nurse’s removal of captain Nitish Kumar in the 19th over. Only one batsman outside the top three reached double-figures.

Kraigg Brathwaite led a methodical chase making an unbeaten 43 off 86 balls. The target was achieved in 29 overs to secure a bonus point for Barbados, putting them one point clear of CCC at the top of Group B with a game in hand.