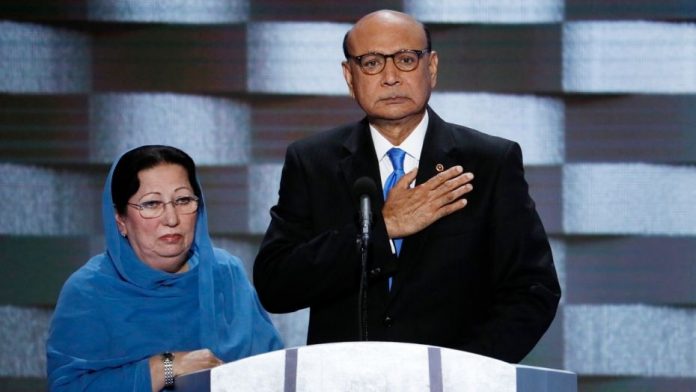 Khizr Khan, right, whose son was killed fighting for the U.S. military in Iraq, took issue Sunday with the White House’s treatment of Gold Star families.

Appearing on CBS’ “Face the Nation” to publicize his memoir entitled, “An American Family: A Memoir of Hope and Sacrifice,” Khan said Kelly “indulged in defending behavior of the president and made the situation even worse.”

He criticized Kelly for standing by President Donald Trump, who engaged in a very public feud on TV and Twitter last week over Gold Star families.

Khan, the father of U.S. soldier Humayun Khan, who was killed in Iraq, added that “restraint and dignity” should be “the call of the moment” when dealing with Gold Star families, instead of turning them into a “political football.”

His comments came more than a year after the Democrats gave him a major platform: the party’s 2016 convention. Khan said on stage that Trump had “sacrificed nothing and no one” for America — unlike Humayun, who posthumously received a Bronze Star and a Purple Heart after a suicide bomber killed him in 2004.

Trump has been engaged in an ongoing feud with Democratic Rep. Frederica Wilson, D-Fla., who said she listened in to a condolence call he made last week to an Army widow. Wilson said Trump told the widow that her deceased husband, Army Sgt. La David Johnson, “knew what he signed up for.” Trump denied it.

Kelly on Thursday publicly criticized Wilson’s involvement in the call and also suggested she was trying to politicize the matter.

Wilson also suggested that Kelly, whose son was killed in Afghanistan, was forced to make public statements on the call to save his job, amid speculation that Trump is unhappy with his performance.

Trump was criticized for saying “both sides” were to blame after white nationalists and alt-right groups gathered in the southern town to protest the removal of a Confederate statue on August 12, sparking violence. Police said a Nazi sympathizer plowed his car through a group of counter-protesters, killing 32-year-old Heather Heyer, a paralegal.