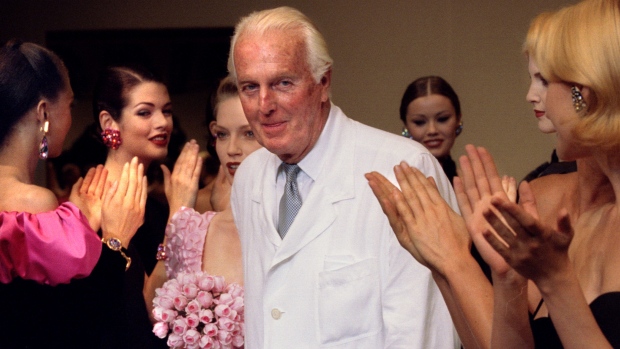 The Paris-based House of Givenchy paid homage to its founder, saying in a statement that he was “a major personality of the world of French haute couture and a gentleman who symbolized Parisian chic and elegance for more than half a century.”

“He revolutionized international fashion with the timelessly stylish looks he created for Audrey Hepburn, his great friend and muse for over 40 years,” the statement said.

“His work remains as relevant today as it was then.”

Givenchy was part of the elite cadre of Paris-based designers, including Christian Dior and Yves Saint Laurent, who redefined fashion after the Second World War.

A towering man with impeccable manners, he forged close friendships with his famous clients, among them Liz Taylor, Jackie Kennedy and Princess Grace of Monaco.

He was born into an aristocratic family in the provincial city of Beauvais on Feb. 21, 1927, and founded his label in 1952, selling it to luxury conglomerate LVMH in 1988. He retired several years later.

Claire Waight Keller, who has been at the helm of the brand since last year, said on her official Instagram account she is “deeply saddened by the loss of a great man and artist I have had the honor to meet.”

“Not only was he one of the most influential fashion figures of our time, whose legacy still influences modern day dressing, but he also was one of the chicest most charming men I have ever met,” she wrote.

Bernard Arnault, chief executive of LVMH, said he is “deeply saddened” by the death of the designer.

“He was among those designers who placed Paris firmly at the heart of world fashion post 1950 while creating a unique personality for his own fashion label,” according to a statement released by LVMH.