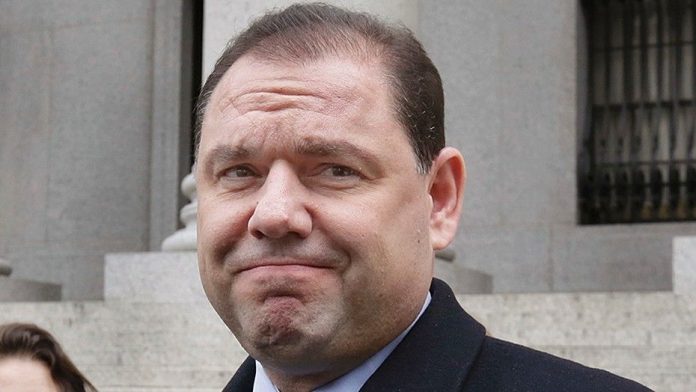 NEW YORK –  A former top aide to Gov. Andrew Cuomo was convicted on corruption charges Tuesday at a trial that further exposed the state capital’s culture of backroom deal-making.

A federal jury in Manhattan found Joseph Percoco guilty of two counts of conspiracy to commit honest services wire fraud and one count of soliciting bribes after deliberating for parts of three weeks.

“Joseph Percoco was found guilty of taking over $300,000 in cash bribes by selling something priceless that was not his to sell – the sacred obligation to honestly and faithfully serve the citizens of New York,” Manhattan U.S. Attorney Geoffrey Berman said.

Jurors had informed the court twice that they were deadlocked in the case against Percoco and three businessmen accused of paying his family more than $300,000 in bribes, but U.S. District Judge Valerie Caproni ordered them to keep deliberating and on Tuesday said she would accept a partial verdict.

Percoco was acquitted of two extortion counts and one of the bribery charges he had faced.

The jury also convicted one of the businessmen charged with paying the bribes, Steven Aiello, an executive at a Syracuse area development company, Cor Development. A second executive with the company, Joseph Gerardi, was acquitted on all counts. The jury said it couldn’t reach a unanimous decision on a fourth defendant in the case, energy company executive Peter Galbraith Kelly.

The verdict followed a multi-week trial that put a spotlight on the attempts of several private companies to gain influence with Cuomo, a Democrat who once likened Percoco to a brother.

Cuomo was not accused of wrongdoing.

Defense lawyers said the payments Percoco received, including $35,000 in cash and a $90,000-per-year job for his wife, were legitimate fees for consulting work performed at a time when he was out of state government.

Prosecutors had urged a conviction, saying Percoco’s communications with former close friend Todd Howe, a lobbyist, shows he participated in a bribery conspiracy.

Howe, who pleaded guilty to numerous crimes after cooperating with prosecutors, became a focus of the trial when he admitted violating his deal with prosecutors by improperly trying to recover the cost of a night at a luxury Manhattan hotel from a credit card company.

It led the government to have his bail revoked midway through his seven days on the witness stand.

None of the defendants testified.