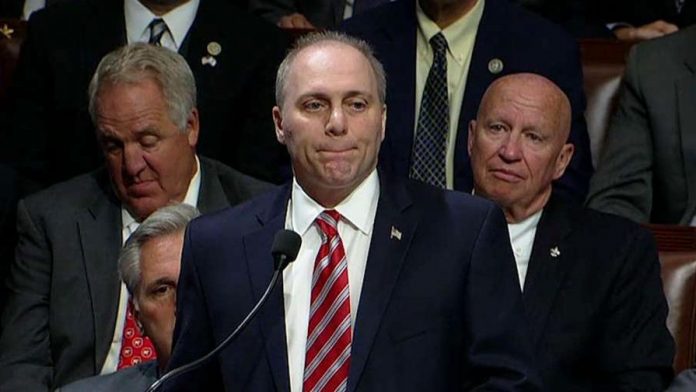 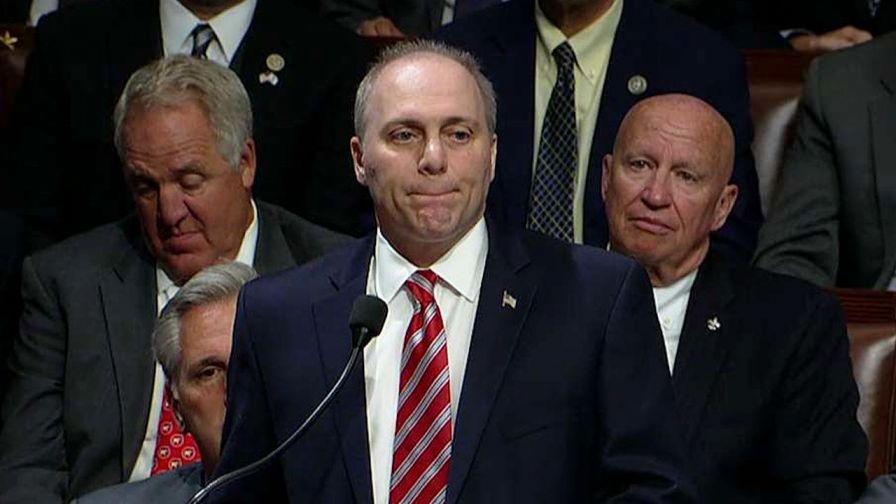 They prayed in the dugout on the practice field.

They prayed before the congressional baseball game at Nationals Park.

To escape the fusillade, Scalise dragged himself on his stomach across the infield dirt from second base to short right field. And then from the grass, Scalise gasped the first invocation about the evil that pierced that morning’s baseball practice.

“When I was laying on that ball field, the first thing I did once I was down and I couldn’t move any more is I started to pray,” said Scalise addressing the House upon his return to Congress on Thursday. “I will tell you it gave me an unbelievable sense of calm, knowing that at, at that point, it was in God’s hands.”

“Our prayers have been answered,” thundered House Speaker Paul Ryan, R-Wis., from the dais, recognizing Scalise to speak.

“Thank God that our prayers are answered,” House Minority Leader Nancy Pelosi, D-Calif., echoed at a press conference an hour or so later.

Joy marked Scalise’s return to Capitol Hill. But his journey was steeped in prayer.

The image of Democrats huddling in the dugout at their own baseball practice to pray after learning of the carnage across town. Democrats and Republicans on the outfield turf at Nationals Park the night of the congressional baseball game as Major League great Steve Garvey led them in prayer.

Lawmakers bowing their heads in prayer together on the House floor. Prayer groups at the First United Methodist Church in Slidell, La.

“I’m definitely a living example that miracles really do happen,” said Scalise, standing at a lectern in the House chamber in a silk red tie, royal blue tennis shoes peaking out below his trouser cuffs, as a reminder of his injuries. “I prayed for very specific things. And I will tell you every one of those prayers was answered. And there were some pretty challenging prayers I was putting in God’s hands. But He really did deliver for me and my family. And it gives you that renewed faith and understanding that the power of prayer is something you cannot underestimate.”

We learned just how grave Scalise’s condition was two days after the shooting, during a press conference at the MedStar Washington Health Center.

“Our family asks that you continue to pray for Steve,” said Scalise’s Chief of Staff Brett Horton reading a statement from the House Majority whip’s wife, Jennifer.

Dr. Jack Sava is the director of Trauma at MedStar. He described the loss of blood and explained how there are “hundreds of fragments” lodged inside Scalise’s pelvis near organs and blood vessels.

“He was in critical condition with an imminent risk of death,” said Sava, describing Scalise’s arrival at the hospital by helicopter.

Scalise remained in critical condition that afternoon at the hospital. But Sava offered some good news.

“It’s my job to be pessimistic,” Sava said. “I feel a lot more optimistic.”

He noted that with proper time and treatment, Scalise had a good chance of being able to walk again, and, hopefully run.

Prayers poured in when Scalise’s condition slipped back to critical because of infection issues and another surgery in early July. But that was expected from the beginning. There would be ups and downs. Dips and turns.

But there seemed to be one constant.

“We saw prayer groups and well wishes being given from people we had never met before,” said Scalise on the House floor. “The power of prayer was something else I saw firsthand.”

Scalise met briefly with Ryan in the Speaker’s Ceremonial Office just off the House floor before Capitol security officials ushered him into the chamber to speak. When asked how it was to see his colleague, an obviously shaken Ryan sighed, paused and kind of shook his head.

“There are no words,” the speaker said.

Later, Ryan recalled visiting Scalise in the hospital when he couldn’t talk and was unconscious. But it was emotional to have the whip — whom Ryan called “Steve-o” — back at the Capitol.

“I’m not like (former House Speaker) John Boehner .I’m not a big crier,” Ryan said. “But I was just a babbling idiot. I could not compose myself.”

Ryan spoke of how he hoped the scene would chasten the tenor of the often noxious Capitol Hill debate.

“Let’s treat people with respect. And let’s pray for each other,” said Ryan.

Agents Bailey and Griner were part of Scalise’s protective detail. Scalise says the gunman’s bullets may have incapacitated him, but the officers consumed his thoughts.

“When I was laying on the ground one of the things I prayed for was that David and Crystal would be successful in carrying out their duties,” said Scalise. He soon heard “a different caliber weapon,” which told him the officers “engaged the shooter.”

Griner is still recovering from her injuries. But Bailey appeared next to Scalise’s wife in the House viewing gallery, earning a shout-out from the whip.

“David, you are my hero,” Scalise said. “You saved my life.”

After meeting with Ryan, Scalise hobbled into the House chamber to deliver his return address. I asked the Louisiana Republican what message he had for his colleagues.

“If you fight and you persevere, you can overcome anything,” he declared.