“Rick Perry is trying to slam through an outrageous bailout of the coal and nuclear industries on the backs of American consumers,” Kit Kennedy, director of energy and transportation at the Natural Resources Defense Council, said in a statement.

“This radical proposal would lead to higher energy bills for consumers and businesses, as well as dirtier air and increased health problems.”

The proposed rule would allow power-generating units to recover certain costs, so long as they provide “essential energy and ancillary reliability services” and keep 90 days of fuel on site, which helps to mitigate supply disruptions. The typical coal-fired facility and nuclear plants would meet those criteria.

Natural gas-fired power plants rely on supplies shipped in by pipeline, and so would not qualify. The Energy Department last month concluded that natural gas’s rising share of U.S. electricity generation, fueled by a boom in U.S. gas drilling, is the main cause of coal and nuclear plant retirements. The finding came in a study on grid reliability ordered by Perry.

Perry directed the Federal Energy Regulatory Commission to take final action on the proposal in 60 days. FERC, which has authority to regulate interstate transmission and sales of electricity and natural gas, is not required to decide in favor of the rule, but must consider it.

In a recent FERC podcast, the commission’s new chairman, Neil Chatterjee, said, “I believe that generation, including our existing coal and nuclear fleet, need to be properly compensated to recognize the value they provide to the system.”

The rule fits with the Trump Administration’s stated intention to support the coal industry. The White House has systematically dismantled President Barack Obama‘s actions aimed at reducing the nation’s contribution to global warming, including by rolling back regulations on power plant emissions.

President Donald Trump has claimed that the growing use of renewable energy could plunge parts of the United States into darkness, but grid experts refute that claim. They say the bigger threat to the nation’s grid comes from its aging transmission and distribution lines, not power plants.

That was the case during Hurricanes Harvey and Irma, which knocked down utility poles and flooded substations in some areas. Still, Perry cited these storms in his letter to FERC. 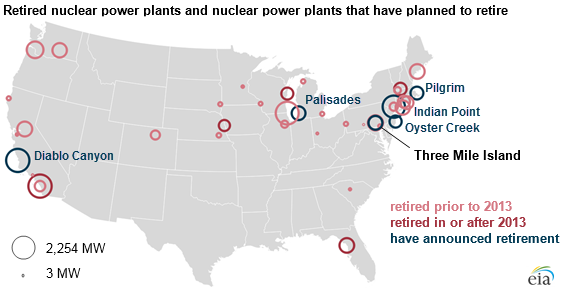 Energy is bought in wholesale markets in many parts of the United States following a wave of deregulation in the early 2000s. The markets were engineered to prioritize the lowest cost energy. That has pushed subsidized renewable plants, which have little marginal cost after they’re built, and cheap natural gas to the front of the line.

The proposed rule is not entirely novel. The PJM-Interconnection, the regional transmission organization that operates the grid and electricity market in 13 states in the eastern U.S., has explored ways to value the attributes of baseload power in its pricing scheme.

Illinois and New York have also allowed nuclear plants to qualify for zero-emissions credits to keep the low-carbon source on the grid as the states attempt to mitigate the effects of climate change. Merchant power generators with nuclear plants in the area lobbied for the policy, while competitors with portfolios weighted to coal and fossil fuel facilities fought it.