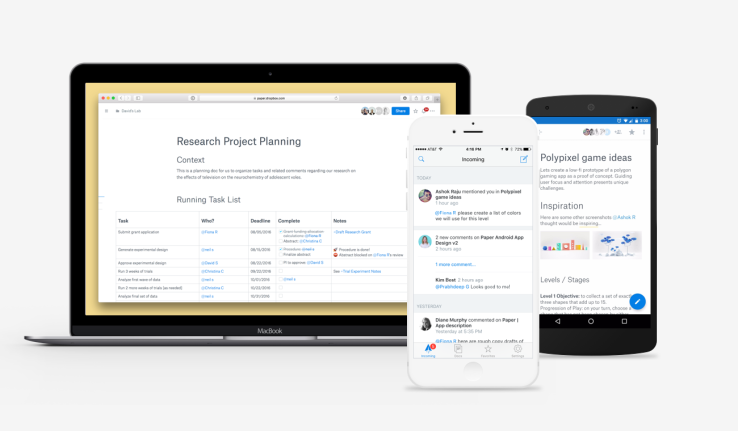 Dropbox continues to tune its products as it tries to tap a bigger audience within larger companies with some updates today to its collaboration tool Paper, including the ability to preview documents before loading them.

As a blank slate, Paper is increasingly popular with designers you might talk to in Silicon Valley. It basically turns the process of designing and building a product spec into a living, breathing flow of information online. As such, Dropbox seems to have started to recognize the opportunity of catering to these users as it starts the drip-drip-drip of incremental product updates to suit those popular needs.

Here’s a quick rundown of what’s getting updated today: users are able to create folders on their mobile devices and move Paper documents into them; they can now delete or archive their Paper documents on their phones; finally, users can now preview Paper documents before opening them. All of these seem to be on the smallish side, but they’re worth noting as Dropbox is a company that touts its simplicity and has to take care not to feature creep a product like Paper.

Dropbox is also giving developers a way to create or edit Paper documents in their own apps, which is a move that will potentially move the product outside of the bounds of the traditional Dropbox experience. But this is also important because it gives third parties which are accustomed to working on these kinds of documents in their own environments a way to do that with Dropbox.

That’s a perpetual danger for any company that tries to lean on its brand as a simpler product, especially as the company tries to break into a mainstream enterprise tool that has to cater to dozens of different team requirements. Dropbox’s challenge is building a more generalized, abstract version of the collaboration tools you might find in other massive products.

It’s going to need to do just that as the company seems increasingly primed for an IPO. The company is reportedly following all the incremental steps toward going public. It’s inevitably going to be compared to companies like Box or Microsoft, but with an origin story as a consumer product, it has to provide a unique pitch if it looks to become a full-fledged business that’s able to tap both consumer and enterprise demand.