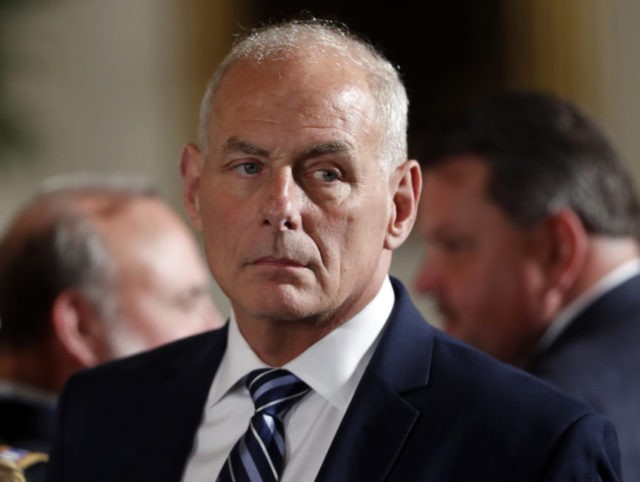 “The American people deserve a White House staff that meets the highest standards and that has been carefully vetted,” read the Kelly memo that emphasized the importance of this in regard to staff working closely with the President or handling “sensitive national security information.”

Echoing words from White House deputy press secretary Raj Shah and Vice President Mike Pence, Kelly indicated that they could have done better handling the Porter situation. “We should — and in the future, must — do better,” he wrote.

Kelly called security clearances one of his “earliest and most immediate concerns” after taking up the position as White House chief of staff. He then listed six “reforms” that he had already implemented: clearance review, training in handling of classified information, increased safeguards and suitability determination as part of the hiring process, end of interim security clearances absent Kelly’s explicit approval, expediting and review of outstanding background investigations, and better oversight and improvements in the personnel security office.

The chief of staff held several “after-action meetings” in the past week. “We discussed what actions likely led to the recent situation, how the processes were working up until this week, and the shortcomings within these processes,” wrote Kelly who also met with senior FBI leadership.

The memo acknowledged “shortcomings” in the current “inherited” clearance processes that were exposed through “recent events.”

Rob Porter is not the first individual to be employed and given clearance despite domestic abuse allegations. Kelly revealed, “…we need to do better across the board…in the past, credible and substantiated reports of past domestic abuse — even physical abuse — were not considered automatic disqualification for suitability for employment or a security clearance.”

In light of this, Kelly announced the creation of a working group. That group will include Kelly, counsel to the President Don McGahn, National Security Advisor H.R. McMaster, deputy chief of staff for operations Joseph Hagin, Attorney General Jeff Sessions, Director of National Intelligence Dan Coats, Director of the FBI Christopher Wray, and heads of appropriate agencies and their counsels, “to study the clearance process in general and to take action to streamline, harmonize, and modernize standards across the Executive Branch.”

The chief of staff laid out in the memo seven actions to “be carefully considered and implemented as appropriate.” Those were listed as follows:

Kelly has ordered that from now on he is to receive at least monthly status reports on “all pending White House staff background investigations and adjudications.”