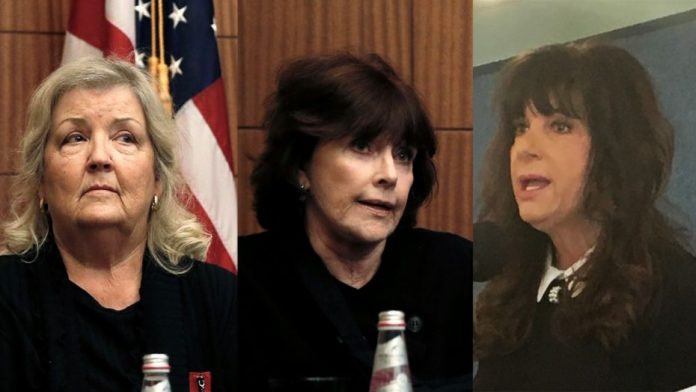 Three women who have accused former President Bill Clinton of past sexual misconduct were among a group of people that barged into Minnesota Democratic Sen. Al Franken’s office on Wednesday to demand he resign from Congress amid sexual harassment accusations.

“We are at Al Franken’s office, and we’re hoping that we get to see him,” Broaddrick said on video before going into the office.

“I don’t think we’ll get anywhere, but at least we can say we were here,” Willey said.

Earlier in the day, Broaddrick, Willey, and Millwee held a news conference in Washington calling for the resignations of Franken and Michigan Rep. John Conyers, another Democrat facing harassment allegations.

They also called for the end to the millions in secret settlements lawmakers have used to quietly settle cases of harassment lodged against them by congressional employees.

“I’m here to demand the resignation of Al Franken and John Conyers,” Willey said. “They are not sorry. Their apologies are weak. The only reason they apologized is because they were caught.”

“I’m tired of paying Bill Clinton’s pension for what he did to me and all of these other women. I know there are many, many more like me,” Millwee said.

Franken said this week he is “ashamed” and “sorry” about his past behavior toward women, but indicated he will not resign. Conyers has denied the accusations of harassment, but has stepped down as the top Democrat on the House Judiciary Committee.