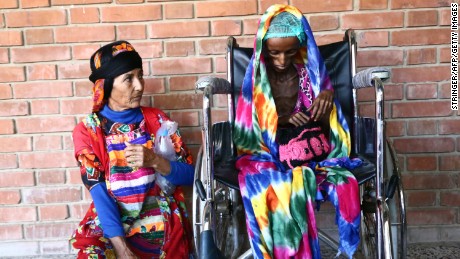 Alexandre Faite, head of the International Committee of the Red Cross delegation in Yemen, described the scale of the outbreak as “unprecedented” on Friday.

He added that “given this trend, we could reach up to 1 million by the end of the year.”

Cholera is an acute diarrheal illness that kills thousands of people worldwide each year. Infections are contracted by consuming food or water contaminated with the fecal bacteria Vibrio cholerae.

In July, the World Health Organization described the outbreak in Yemen as “the worst cholera outbreak in the world.”

A ravaged health care system, devastated infrastructure and near famine — the results of a bloody civil war that began in March 2015 — have all contributed to the spread of the disease.

As of September 13, there were 2,074 known deaths from cholera across the country, according to the WHO, with previous reports estimating that 5,000 people were being infected each day.

Faite said the health system is at a breaking point, raising concerns about how the country would cope with a further major outbreak. The situation is becoming even worse given that salaries for civil servants — including health workers in public hospitals — have not been paid for more than a year, he said.

“The tragedy is, both malnutrition and cholera are easily treatable if you have access to basic health care. But hospitals and clinics have been destroyed, government health workers haven’t been paid for almost a year, and the delivery of vital aid is being obstructed,” Tamer Kirolos, Save the Children’s country director for Yemen, said previously.

“Yemen’s health workers are operating in impossible conditions. Thousands of people are sick, but there are not enough hospitals, not enough medicines, not enough clean water. These doctors and nurses are the backbone of the health response — without them, we can do nothing in Yemen,” Dr. Tedros Adhanom Ghebreyesus, WHO director-general, said in a statement.

Dehydration from rapid loss of body fluids is the reason cholera can be so deadly within hours if not treated. But 80% of cholera cases can be treated and resolved with oral hydration salts — if they are available.

Faite urged the full reopening of the airport in Sana’a, Yemen’s largest city, to all humanitarian flights, to allow access for commercial flights to evacuate patients for treatment abroad. His organization, Médecins Sans Frontières and the United Nations can currently use the airport.

“To save lives in Yemen today, we must support the health system, especially the health workers. And we urge the Yemeni authorities — and all those in the region and elsewhere who can play a role — to find a political solution to this conflict that has already caused so much suffering,” Tedros said.

A disease fueled by unrest

Cholera is rare in industrialized countries, and outbreaks occur predominantly in nations ravaged by civil unrest or natural disasters, where infrastructure, access to water and sanitation and health care systems are lost or damaged among a displaced population.

A cholera outbreak in the Democratic Republic of Congo has claimed 528 lives as of September 22, according to the World Health Organization.

The country has reported more than 27,000 suspected cases, with this year’s outbreak appearing to be more severe than those of the past three years, the WHO said in a statement. The organization added that ongoing conflict and unrest have created population displacement and worsened access to safe water, sanitation and basic services.

Médecins Sans Frontières has treated 17,000 people and set up 30 treatment centers since the government declared a cholera epidemic on September 9, the nongovernmental organization confirmed. “We are carrying out a wide response to cover the most affected areas of the country, and the number of patients in our centers has declined in recent weeks,” Cisco Otero, Médecins Sans Frontières’ head of mission in Congo, said in a statement.

The Greater Kasai region of central Congo remains at high risk of disease spread due to poor health and safety conditions. The heavily endemic zone in the east experienced annual surges in cholera cases, while the disease continuously affects other zones throughout the year.

According to the United Nations Office for the Coordination of Humanitarian Affairs, youth, minors and internally displaced persons are among the most affected.

“The year 2017 is likely to be one of the worst years of this decade in number of cases (in Congo). An unusual and worrying increase has already been noted in the last few weeks, before the onset of the rainy season in the provinces most at risk,” an agency representative said.

On Friday, the WHO also announced the release of 900,000 doses of oral cholera vaccine from the global stockpile to prevent the spread of illness among recently arrived vulnerable populations and host communities in the district of Cox’s Bazar in Bangladesh.

Amid violence in Myanmar, more than half a million people have crossed from there to Bangladesh since August 25, according to the WHO, with many now in crowded in camps or settlements, enduring heavy rains and limited access to clean water and sanitation. These conditions increase the risk of cholera.

The release of the vaccines is a preventative measure, to avoid outbreaks like those seen in Yemen and Congo.

“There is an urgent need to protect the hundreds of thousands of Rohingya refugees who have sought shelter in Bangladesh, as well as resident population with the oral cholera vaccine,” Dr. Seth Berkley, CEO of Gavi, the Vaccine Alliance, said in a statement. “We are gravely concerned by the critical situation that they are facing and by the potential public health disaster that could occur if we don’t act fast.”

CNN’s Simon Cullen and Daniella Emanuel contributed to this report.