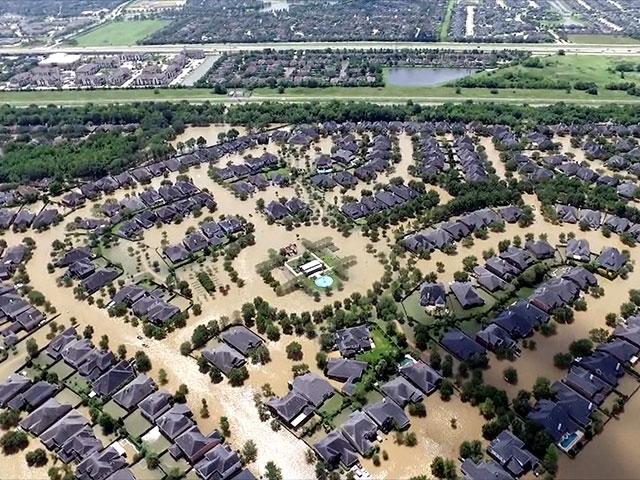 Now a tropical depression moving inland, Harvey is beginning to release its dead. At least 30 people are now known to have been killed by the storm.

And the toll from Harvey continues to climb as emergency workers begin to discover the bodies of people who were trapped in homes and cars.

Now there’s a new danger: There were two explosions this morning at the Arkema chemical plant in Crosby, Texas. Company officials had warned that without power for refrigeration or backup generators,  chemicals stored at the facility would explode.

“The fire will happen. It will resemble a gasoline fire. It will be explosive and intense in nature,” company spokeswoman Janet Smith said.

The plant makes peroxide. The area around the plant had already been evacuated, but one sheriff’s deputy had to be taken to the hospital after inhaling fumes.

Meanwhile, flooding victims are just coming to grips with the grim aftermath.

One resident said, “Everything’s gone in the whole neighborhood.”

“In all my years on this earth, I’ve never seen anything like this,” another resident said.

In Port Arthur, one of many nursing homes was under water. More than 70 elderly patients were stranded and soaked for 24 hours until help finally arrived.

The storm that paralyzed Houston is predicted to be one of the most expensive natural disasters in U.S. history, and it stands to be one of the largest humanitarian and rebuilding challenges as well.

In Houston’s Harris County, officials are estimating up to 40,000 homes are gone.

But Jeff Lindner with the Harris County Flood Control District said, “A hundred-thousand is certainly not out of the question”

Officials are now going door to door marking bright orange “C”s on homes that are clear.

Those returning to their homes must sift through water logged possessions.

But there was an uplifting note, as a team of ministers from Conroe, Texas, offered people in shelters hope and encouragement through praise and worship songs, and the video has had nearly 15 million views.

“What Americans have seen on TV is the way Texans are, and that is Texans always unite in support of one another and we especially unite in times of tragedy,” Abbot said.

“I can’t begin to tell you the number of lives saved simply by neighbors helping neighbors.”