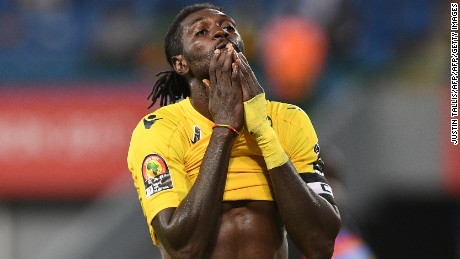 Now, however, the Frenchman was tasked with eliminating his former employers as his new side, Morocco, looked to cement a place in the knockout stage.

Ivory Coast, knowing only a win would see it qualify for the quarterfinals, will have entered the match with a comforting feeling of déjà vu.

On their way to lifting the trophy in 2015, the Elephants also drew their first two group games and went into the third knowing anything less than victory would see them eliminated.

But recent history hasn’t been kind to reigning AFCON champions. Not since Egypt qualified for the quarterfinals in 2010 has a team defending its crown made it out of the group stages.

Ivory Coast, eager to break that curse, started the match on the front foot.

Morocco’s Mehdi Benatia, who so far during AFCON 2017 has fallen short of his own high standards, gifted an enthusiastic Saloman Kalou possession by the touchline, but the Hertha Berlin striker was smothered before he could get a cross away.

The Atlas Lions knew a draw would likely be enough to see them advance, but hadn’t tasted victory over the Ivory Coast since November 1994.

Fayçal Fajr — who has been Morocco’s most creative player during the tournament — hit a brilliant free-kick from 20 yards, but could only watch as his effort rattled the underside of the crossbar with Sylvain Gbohouo well beaten.

After almost half an hour, it was the first real chance of note the two obviously nervous sides continued to feel each other out.

With less than 10 minutes left of the first half, the Ivory Coast almost found a breakthrough.

Delightful footwork from Kalou played in Wilfred Zaha down the left, but the Crystal Palace forward could only place his shot comfortably within Mohan Mohamedi’s reach.

For a team that desperately needed a win, the Ivory Coast lacked any glimmer of intensity or creativity and coach Michel Dussuyer — who has come in for heavy criticism during the competition — needed to ensure his half-time team talk was a rousing one.

However, with barely a minute played in the second half, Gbohouo flapped at a cross and teed up Benatia on the edge of the area, but the Juventus defender could only float his lob well over the bar.

In a match that had so far severely lacked any semblance of quality, it seemed strange that a moment of genius would eventually be the difference between the sides.

Substitute Rachid Alioui, on in the first half to replace the injured Aziz Bouhaddouz, received the ball from lively teenager Youssef En-Nesyri.

Rather than play an immediate return pass, which looked the most effective option, Alioui stopped the ball and took aim from all of 30 yards.

With Gbohouo off his line, Alioui’s shot curled over the keeper’s despairing dive and the ball nestled in the top corner of the net for arguably the goal of the tournament.

The Ivory Coast had 25 minutes to find two goals, though in truth lacked the necessary cutting edge to seriously trouble Mohamedi at all in the second half.

With Morocco booking safe passage through to the quarterfinals, Renard remains on course to become the first manager in history to win the Africa Cup of Nations with three difference countries.

Togo traveled to Port-Gentil knowing nothing but a win would do against group leader DR Congo, with coach Claude Le Roy similarly charged with taking down his former employer.

It was never likely to be easy, and the experienced Frenchman’s task was complicated by the absence of his first-choice goalkeeper before events had even kicked off, with Kossi Agassa over 1,000km away in the Togolese capital of Lome.

Certain sections of the Togo support had taken umbrage with Agassa’s performance in the 3-1 defeat to Morocco on Matchday 2, resorting to vandalizing his home.

Deeply affected by the news, the 38-year-old was granted emergency leave, Baba Tchagouni came in and a defiant Le Roy told reporters the “solidarity” of the team would not be comprised.

It appeared his rallying cry had produced the desired effect in the early stages, as the Sparrowhawks aimed to reach the quarterfinal for just the second time in their history.

Le Roy could certainly count on his captain, with record goalscorer Emmanuel Adebayor showcasing boundless energy with a series of purposeful forward runs.

But fate can be cruel, and it wasn’t long before Togo lost Tchagouni as well as Agassa.

It could hardly have been a more innocuous injury, with the replacement goalkeeper making a hash of a simple clearance — and yet, though he valiantly tried to continue, his efforts were in vain.

Kissed on the forehead by a solemn Adebayor, Tchagouni left the pitch in tears after little more than 20 minutes and Togo number three Cedric Mensah — currently plying his trade in the French fifth tier — stepped up for the game of his life.

In no mood for sentiment, the Leopards of DR Congo quickly showed why they have been tipped as tournament contenders.

With a goal to his name in both opening games, mercurial forward Junior Kabananga came to the fore on the half-hour mark, capitalizing on hesitant Togo defending before shrugging aside Serge Gakpé and slotting home.

Kabananga moved into pole position in the scoring charts; DR Congo had the lead.

And the Kazakhstan-based forward was almost producing his dynamic trademark celebration once again before the first half was done — an instinctive header from Firmin Ndombe Mubele’s corner guided beyond the despairing Mensah and onto the far post.

If that near miss was something let-off, Togo didn’t heed the wake-up call as they returned for the second half.

In fact, the Sparrowhawks looked like statues as a casual DR Congo clearance found Mubele in acres of space with just Mensah to beat.

The young forward looked almost embarrassed by the amount of space he was afforded, casting a quizzical glance at the linesman before cleverly dinking over the onrushing goalkeeper.

Introduced in place of the ineffective Mathieu Dossevi, Kodjo Fo-Doh Laba did get one back — rounding-off a well-worked move to score with his first touch — but there was to be no grandstand finish.

Adebayor had started the move but it was his missed effort just seconds later — lashed straight into the grateful arms of Matampi — that all but extinguished Togolese hopes.

Indeed, the enterprising DR Congo team regained the momentum — and a two-goal cushion — just ten minutes later, as a free kick from Paul-Jose Mpoku struck the underside of the crossbar and beat the third-choice keeper for the third time.

As the final whistle sounded in Port-Gentil, the Leopards had every right to celebrate; they top Group C unbeaten and await a quarterfinal clash in the jungle of Oyem.