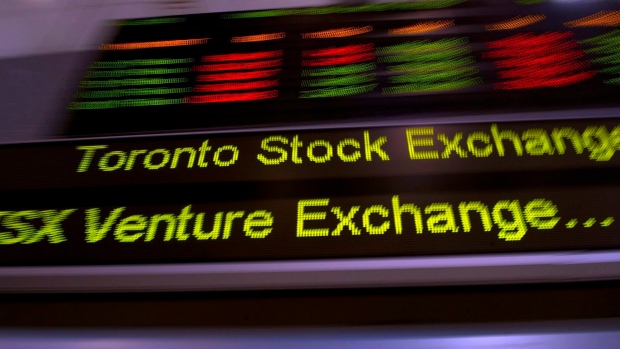 Canadian shares traded lower this morning, following the global trend, as investors turned cautious after an impressive start to the year led to record highs.

Shares of Thomson Reuters jumped as much as 10 per cent after news it was in advanced talks with private equity firm Blackstone for a potential partnership in its financial and risk business.

Shares of grocery giant Metro also rose over four per cent after its first-quarter earnings beat expectations with higher profit and revenue.

The Canadian dollar, meanwhile, was trading at 81.08 US cents, slightly higher than Monday’s average price of 81.07.

U.S. markets saw their second day of declines ahead of the Federal Reserve’s monetary policy meeting on Wednesday.

The Dow Jones Industrial Average fell 1.3 per cent, while the Nasdaq Composite was down 1.2 per cent Tuesday morning. The S&P 500 index was down one per cent.

Shares of health-care stocks took a big hit, leading the losses on benchmark indexes after a new venture was announced by Amazon, JPMorgan Chase and Warren Buffet’s Berkshire Hathaway.

The world’s biggest e-commerce retailer is teaming up with the two other major companies to create a company that helps its U.S. employees find quality care at “a reasonable cost.”

Express Scripts plunged as much as nine per cent and UnitedHealth Group sank over five per cent.

Derek Holt, head of capital markets economics at Scotiabank, said markets are also seeing a rebalancing that happens at the end of the month, when investors take holdings away from stocks to bonds.

“By week’s end, we should have a better sense of whether recent market swings are somewhat transitory in nature or longer lived,” he said.

Rest of the world

European shares were also lower despite economic data showing the euro zone economy grew at its fastest pace in a decade last year.

Analysts said the strong growth could help convince the European Central Bank to wind back its monetary stimulus program earlier than expected.

Britain’s FTSE 100 and Germany’s DAX lost about one per cent in afternoon trading.