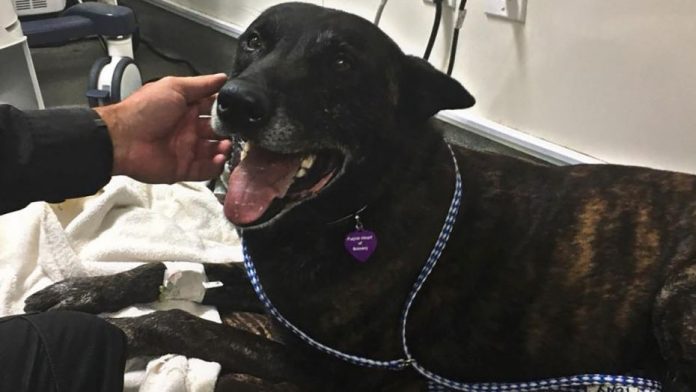 Santa Ana K-9 Puskas wearing a purple heart on his collar after undergoing surgery for injuries he received while apprehending a suspect.

A K-9 officer from the California’s Santa Ana police force underwent surgery Tuesday after he lost some teeth while apprehending an alleged carjacking and assault suspect the day before.

Puskas broke all of his teeth except for his canines when his face hit the concrete sidewalk during the takedown, officers told The Orange County Register. The eight-year-old Dutch shepherd also received a deep cut to his face.

The dog’s teeth “were broken off, some pushed in” and there was “a large laceration on the bottom of his chin area,” authorities told SFGATE. 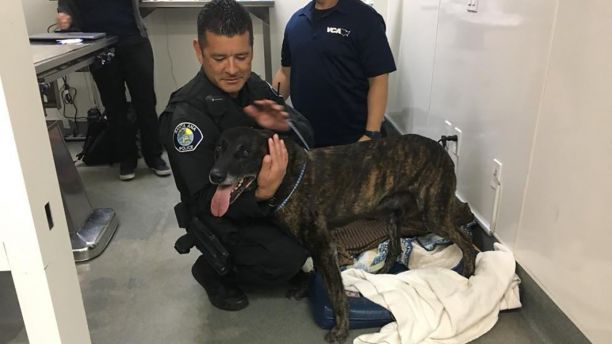 Puskas with his handler, Officer Luis Galeana, after surgery on Tuesday.

Puskas had each broken tooth extracted and the chin gash stitched up by doctors, Cpl. Anthony Bertagna told the Register. Doctors expected the dog to return to work in a few weeks, Bertagna said.

After the successful surgery, Puskas received a purple heart for his “selflessness and bravery” in subduing the suspect.

Police identified the suspect as Antonio Padilla Jr., 37, of Riverside County. Police said they have been searching for Padilla for allegedly assaulting a Garden Grove officer with a deadly weapon during a traffic stop last week.