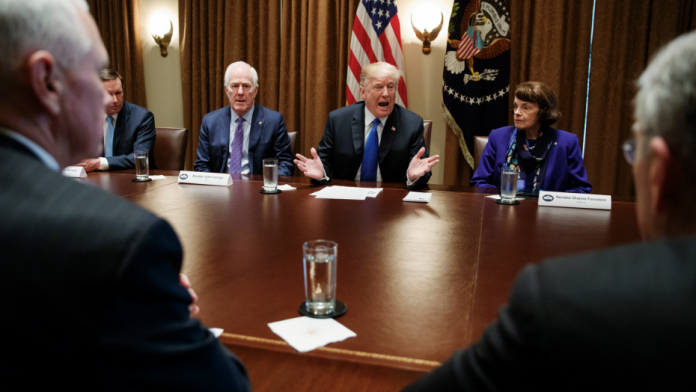 Presidents, Congress and some agency heads set up panels stocked with subject experts to offer sage advice to policymakers. But these panels sometimes are used to slow-walk thorny policy into oblivion.

President Donald Trump chose what one expert calls “the blue ribbon option” when he assigned a sensitive gun control proposal to a new panel on school safety, part of a package the White House announced Sunday in response to the school shooting in Parkland, Florida. He put Education Secretary Betsy DeVos in charge of the panel and left clues that a key proposal he’s voiced support for — raising the purchase age for some firearms — was now in doubt.

There’s “not much political support (to put it mildly),” the president tweeted about the proposal, which is opposed by the National Rifle Administration.

For lawmakers and presidents, creating a commission “represents movement, it’s something that they can report, especially if they’re subject to criticism that they’re taking no action or they’re tone deaf,” said Kenneth D. Kitts, a political science professor at the University of North Alabama and the author of “Presidential Commissions and National Security: The Politics of Damage Control.”

Trump has made it clear he doesn’t think much of such panels, either.

Commissions through history have produced important historical information, policy and even material for criminal trials. President Lyndon B. Johnson ordered the Warren Commission to produce a record of the assassination of President John F. Kennedy. President George W. Bush’s 9/11 Commission was established to account for the circumstances surrounding the terrorist attacks of September 11, 2001.

Others were less successful. In 2010, the report from President Barack Obama’s bipartisan debt reduction commission did not win enough votes among its members to send it to Congress for a vote.

In 2001, President George W. Bush created a 16-member bipartisan commission to study the feasibility of “modernizing” Social Security. Its recommendations floundered in Congress.

Critics of commissions say they’re primarily created for reasons other than good public policy: They allow lawmakers and officials to look like they’re doing something about controversial topics without having to take a position that could alienate some constituencies — such as the NRA, in the case of Republicans in this midterm election year. Their members are not elected or accountable to the public.

There’s also no quality control, and they’re expensive. The Congressional Research Service in November 2017 reported that commission costs can range from several hundred thousand dollars to more than $10 million. And after all that, lawmakers can simply ignore a commission’s conclusion.

Trump has had some experience as president with the peril of blue-ribbon commissions.

His unsubstantiated claim that millions of illegally cast ballots cost him the popular vote in 2016 led to his executive order last May establishing a commission on “election integrity.” The panel’s work quickly devolved into squabbling, with states refusing to give up their voting information and critics saying the commission was actually about suppressing votes.

In January, Trump terminated the commission and transferred its duties to the Department of Homeland Security.

His commission on opioids produced limited results. In October, Trump declared opioid abuse a national public health emergency. He announced an advertising campaign to combat what he said was the worst drug crisis in the nation’s history, but did not direct any new federal funding toward the effort.

But in its final report in November, the panel called only for more drug courts, more training for doctors and penalties for insurers that dodge covering addiction treatment. It did not call for new money to address the epidemic.

“Do you think the drug dealers who kill thousands of people during their lifetime, do you think they care who’s on a blue-ribbon committee?” Trump railed on Saturday.

AP Researchers Monica Mathur in Washington and Randy Herschaft in New York contributed to this report.