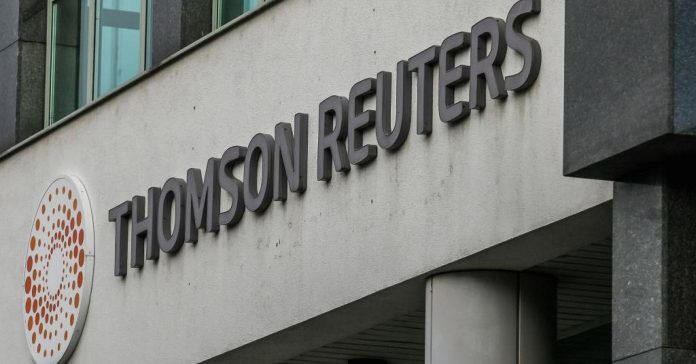 US private equity firm Blackstone Group LP is in advanced talks to buy an approximate 55% stake in the Financial and Risk business of Thomson Reuters Corp, a deal that would value the unit at about US $20bn including debt, three sources familiar with the matter said on Monday.

Thomson Reuters’ board, the sources said, is expected to meet on Tuesday to discuss Blackstone’s offer for the F&R business, which supplies news, data and analytics to banks and investment houses around the world.

The unit contributes more than half of Thomson Reuters’ annual revenues.

Under the terms of the Blackstone offer, Thomson Reuters would retain a 45% stake in the F&R business as part of a partnership with the US buyout firm, according to the sources.

Thomson Reuters would receive more than US$17bn for the deal, including about US$4bn in cash from Blackstone and about US$13bn financed by new debt taken on by the new F&R partnership, two of the sources said.

The whole F&R business is valued at about US$20bn, consisting of about US$7bn in equity and US$13bn in debt, they said.

Thomson Reuters said in a statement late on Monday that “it is in advanced discussions with Blackstone regarding a potential partnership in its F&R business.” The company gave no more details. A spokeswoman for Blackstone declined to comment.

If the board agrees to a deal with Blackstone, it would represent the biggest shake-up of Thomson Reuters since it was formed a decade ago by Thomson Corp’s acquisition of Reuters Group Plc. Canada’s Thomson bought London-based Reuters for £8.7bn in 2008, worth US$17bn at the exchange rate at the time.

Reuters was unable to determine who would lead the new division.

Thomson Reuters would hold on to its international news service, Reuters, along with its Legal and Tax and Accounting divisions. Reuters is expected to continue to supply news to F&R’s flagship desktop product, Eikon, as well as to other products, though the details of the arrangement could not be determined.

The sources cautioned that a deal had not been finalized and could still fall apart. They declined to be identified because the negotiations are confidential.

It is unclear how the proposed deal would be viewed by trustees of the Thomson Reuters Founders Share Co, which was set up to oversee Reuters’ editorial independence when the company was first publicly listed in the 1980s.

The trustees approved Thomson’s deal with Reuters a decade ago. Thomson Reuters Founders Share Co-Chairman Kim Williams did not respond to requests for comment.

Blackstone has some experience in the information business. It bought Ipreo, which sells specialist software for tracking capital markets’ activities in 2014 for just under US$1bn.

Canada’s Thomson family controls more than 63% of Thomson Reuters shares through Woodbridge Co Ltd. The news and data provider has a market value of about US$31bn and its shares trade on the New York and Toronto stock exchanges.

Since its creation in 2008, Thomson Reuters has carried out more than 200 acquisitions but has struggled to integrate some of the assets it took on, especially in its F&R division, which was hit hard by the financial crisis.

Growth in the business has slowed as banks and brokerages shrank in the face of weak trading. But amid tougher regulations around risk-taking, the regulation and compliance business has been a bright spot.

To streamline its business, Thomson Reuters has reduced the number of products within its F&R segment while shrinking its workforce.

“The progress we have made turning around the F&R business and its future potential are reflected by Blackstone’s interest,” Thomson Reuters Chief Executive Jim Smith said in a staff memo.

“We believe F&R is well positioned within Thomson Reuters, but it could be even stronger with a partner like Blackstone.”

The company has also sought to sell non-core assets, including its intellectual property and science business, which it sold to private equity firms Onex Corp and Baring Private Equity Asia for US$3.55bn in 2016.

Shares of Thomson Reuters have fallen 9% over the past 12 months compared to a 3% rise in the Toronto Stock Exchange’s main index in the same period.