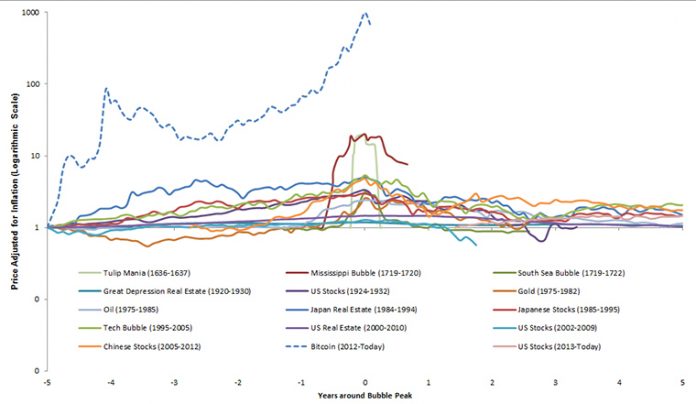 Bitcoin prices are in a bubble that will burst in the near future because the cryptocurrency has many inherent flaws, Allianz Global Investors said in a report.

“It appears to us that bitcoin mania is a textbook-like bubble – and one that is probably just about to burst,” the asset manager’s head of global economics and strategy, Stefan Hofrichter, said in an online post distributed Friday. “As a currency and asset class, bitcoin has potentially fatal flaws – which is why we believe it’s a matter of when, not if, the bitcoin bubble will pop.”

Bitcoin has fallen sharply since leaping 2,000 percent in the 12 months through December to a record high above $19,000. The cryptocurrency was trading near $8,700 Wednesday, according to CoinDesk’s bitcoin price index.

Allianz has 498 billion euros ($615 billion) in assets under management, according to its website.

Compared with other bubbles, bitcoin is almost off the charts 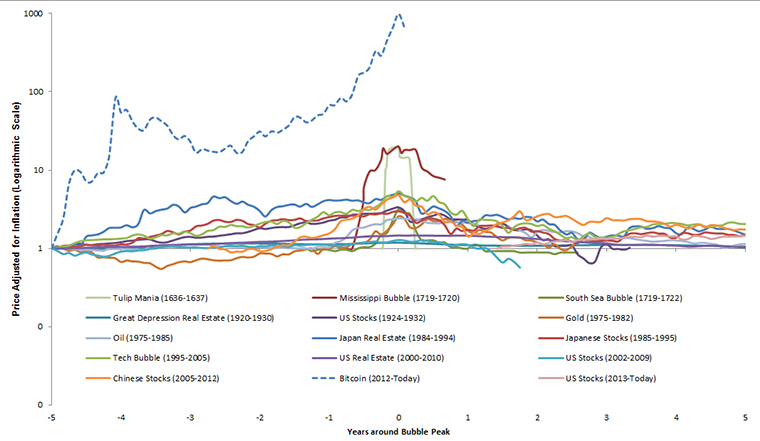 The cryptocurrency “ticks all of the boxes that we consider to be essential criteria of any asset bubble,” including a fivefold surge in trading volumes over the last five years, lack of financial regulation and the launch of related financial instruments such as bitcoin futures, the Allianz report said.

Neither does bitcoin have any intrinsic value because it does not have a claim to the assets of a government or company and does not generate any income, Hofrichter said. He added that bitcoin is also not a viable currency because of high transaction fees, high price volatility and inability to be used as a store of value.

From an environmental, social and governance perspective, Hofrichter said bitcoin is also unattractive because of the high level of energy required to produce the cryptocurrency. Estimates of bitcoin’s total electricity consumption are difficult to measure and subject to debate, but what’s clear is mining the cryptocurrency consumes a lot of power.

In less than 10 years, bitcoin has evolved quickly from being a fringe asset often used by criminals into a globally traded asset. CME, the world’s largest futures exchange, and its competitor, Cboe, launched bitcoin futures in December, and more than 200 “cryptofunds” now exist for investing in bitcoin and other cryptocurrencies, according to financial research firm Autonomous Next.

However, like many business leaders and analysts from traditional financial institutions, Allianz’s Hofrichter said the blockchain technology behind bitcoin “clearly has potential merits,” such as lower costs on verifying transactions.

“It is this aspect of cryptocurrencies in general – and not the specific cryptocurrency du jour – that we as an asset-management firm find to be the most interesting,” Hofrichter said.

Bitcoin is the first application of blockchain technology, which eliminates the need for a third-party intermediary such as a bank by quickly creating a secure and permanent record of transactions between two parties.

Startups and major corporations alike are working on projects to apply blockchain to businesses such as financial services and supply chain management. Some firms include IBM and Accenture, which each have many employees dedicated to researching blockchain.

“These are numbers that are just going to grow as the technology works itself into more mainstream use cases,” said Matt Markiewicz, managing director at a company behind a blockchain-focused exchange-traded fund, Innovation Shares NextGen Protocol ETF (KOIN).